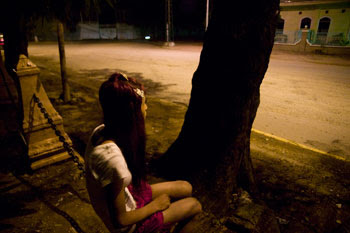 Written by May Titthara
Friday, 19 September 2008

THEY are most easily found in nightclubs that cater to foreigners. After hours, they loiter in the shadows of Wat Botom and Wat Phnom, or idle away the evening in clusters along the river waiting for clients.

Young men like Soun, 24, (not his real name) are entering Cambodia's sex trade in growing numbers and for a variety of reasons. Some seek a better life for their families in the only way they know how. Others use the trade to explore alternative sexual lifestyles.

Whatever the reason, business is brisk.

"I always go to the clubs where foreigners hang out," said Soun, who has been a male prostitute since the age of 17.

"When the clubs close, I move to the front of Wat Botom," he said, adding that a typical night's work runs from 8pm to around midnight.

Many of his clients find him through a network of sex brokers who comb the city looking for men or women seeking or selling companionship. Others find him at the wats or along the riverside, where many of the city's prostitutes congregate each night.

"I am available for both men and women, depending on who approaches me. Sometimes the women I sleep with are much older than me, anywhere from 30 to 50 years of age," Soun said.

"Most of them are Cambodian widows, but some of my customers are young Khmer guys and a few older Khmer men."

Soun's face flushes crimson when the conversation turns toward prices.

Stating your preference is simply a matter of learning the code.

Soun said that when he asks his male clients why they want to have sex with him, most of them say they want to try something different. Others say they are tired of women.

While Soun has some clients in the capital, most of his business is transacted in the provinces. "My regular clients are mostly living in Siem Reap and Sihanoukville," he said. "They sometimes book me for a week, so they have to pay for my accommodation and food as well as my sexual fees."

" A friend told me to go sit by the riverside and people could come ask me for sex. i was 17 then. I've worked in the business ever since. "

Soun keeps a calendar for long-term clients, but others can simply ring him on the day. "In Phnom Penh, girls who want to have sex just call my mobile phone and tell me where to meet. Sometimes, they hire a taxi driver to come pick me up." 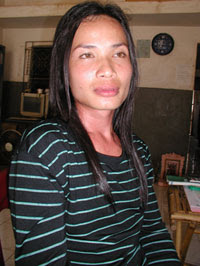 PHOTO SUPPLIED; Many male prostitutes in Phnom Penh say they went into the trade due to poverty.
A life filled with danger

But Soun warned against thinking his life is one of ease and happiness.

He said prostitution can be a dangerous business, particularly with his Cambodian male clients. They often hire him for sex with one person, but he shows up to find a group of four or five waiting for him. He can't refuse because he is outnumbered.

And then, there is the ever-present risk of sexual diseases. "To protect ourselves from HIV, we always talk to our clients about using condoms. I have problems with teenage boys because they want oral sex," he said.

Kek Galabru, president of Cambodian rights group Licadho, said she has seen an increase in male sex workers in a market traditionally dominated by women.

According to Kek Galabru, many of the capital's male prostitutes turned to sex work because, lacking education or skills, they can find no other way to support their families. Others do so because they prefer sex with men, she said. Nuon Sidara, executive director of Action for Sexual Health, said exact numbers of male prostitutes in Cambodia are difficult to determine because many work in secret.

The risk of disease is much higher among male sex workers who largely sleep with male clients, Nuon Sidera said.

Studies done on men engaging in gay sex have shown that 8.7 percent in Phnom Penh were HIV-positive, a rate that is almost nine times that of the general population.

"My organisation tries to teach them how to protect themselves from disease and provides condoms free of charge," Nuon Sidera said.

Soun gets thoughtful when he considers the life he has chosen.

"My family is very poor, so I needed to find a job that could support us all. I never thought I would become a prostitute," he said.

"A friend told me to go sit by the riverside and people would come ask me for sex. I was 17 then. I've worked in the business ever since."
Posted by CAAI News Media at 9:04 pm

I have been exploring for a bit for any high-quality articles or weblog
posts in this kind of area . Exploring in Yahoo I eventually stumbled upon this
website. Reading this info So i am satisfied to exhibit that I have an incredibly just right uncanny feeling I came upon just
what I needed. I most certainly will make certain to do not put out of your mind this web site and provides it a look regularly.

Hi I am so excited I found your site, I really found you by mistake,
while I was searching on Yahoo for something
else, Anyhow I am here now and would just like to say cheers
for a remarkable post and a all round entertaining blog (I also love the
theme/design), I don't have time to go through it all at the minute but I have book-marked it and also added in your RSS feeds, so when I have time I will be back to read much more, Please do keep up the awesome work.

Nice blog! Is your theme custom made or did you download
it from somewhere? A design like yours with a few simple adjustements
would really make my blog stand out. Please let me know where you got your design.