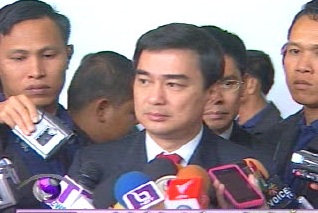 
via CAAI
BANGKOK, Oct 3 -- Thai Prime Minister Abhisit Vejjajiva said he would confer with his Cambodian counterpart Hun Sen on the two countries’ border problem on the sidelines of the 8th Asia-Europe Meeting being held in Belgium this week.
It is possible that more talks on the issue, especially on actions of concerned government units of each country, will be discussed after the informal talks of the two leaders in New York late last month, Mr Abhisit said.
Some projects such as those involving education and cultural exchanges between the two countries have made considerable progress, he said.
The border problem with soldiers of both countries facing each other on the border may be discussed further, Mr Abhisit said.
Asked whether he would ask Mr Hun Sen for a troop withdrawal to ease tensions when they meet at the upcoming meeting, Mr Abhisit said the Cambodian government fully realises that existing bilateral mechanisms agreed by the two countries must be approved by the Thai parliament.
Thailand and Cambodia signed a memorandum of understanding in 2000 to establish a Joint Boundary Commission to demarcate overlapping parts of their boundary, but the framework for border demarcation has not been approved by the Thai parliament as required by the constitution.
The two neighbouring nations have been locked in a military standoff on their disputed border since July 2008, when the historic Preah Vihear temple was granted UNESCO World Heritage status.
The International Court of Justice ruled in 1962 that the temple belonged to Cambodia, although its main entrance lies in Thailand. The exact boundary through the surrounding grounds remains in dispute, with occasional full-scale military skirmishes claiming a number of lives.
Realising that the border problem has been continuing too long, Mr Abhisit said “there are several problems which hinder a final agreement as processes must be approved by each country.” (MCOT online news)
Posted by CAAI News Media at 9:44 pm 3 comments: Links to this post

2010-10-03
Xinhua
Web Editor: Gongming
via CAAI
Thai Prime Minister Abhisit Vejjajiva said he would consult with his Cambodian counterpart Hun Sen on the two countries' border dispute on the sidelines of the 8th Asia-Europe Meeting in Brussels, on 5-6 October.
After the latest talks of the two leaders in New York late last month, more discussions on the border issue especially on actions of concerned government agencies of each country are possible, Abhisit said.
The Thai News Agency quoted Abhisit as saying that the border problem with soldiers of both countries facing each other on the border may be discussed further.
Thailand and Cambodia have an age-old dispute over the area along their border and over the 900-year-old Hindu Preah Vihear Temple. In 1962, the International Court of Justice ruled the temple belongs to Cambodia although its main entrance lies in Thailand.
Tensions flared up again as the UNESCO named Preah Vihear a World Heritage in 2008 and once again as Cambodia appointed Thailand's ousted ex-PM Thaksin as its economic adviser in November 2009. Armed clashes resulting in casualties on both sides have occurred occasionally in the area since then.
Thailand protested against Cambodia by recalling its ambassador soon after Thaksin's appointment, and then Cambodia followed suit. The two countries' diplomatic relations did not resume to normal until Aug. 25 of this year, when they reinstated the ambassadors to each other, following Thaksin's resignation.
Posted by CAAI News Media at 9:42 pm No comments: Links to this post


via CAAI
By Robert Carmichael
Oct 3, 2010
Pailin, Cambodia - 'They do not have blood on their hands,' said Mey Mak, Pailin's bespectacled deputy governor, of the four former Khmer Rouge leaders indicted last month by the war crimes court.
'Khieu Samphan, for example, he was responsible for the economy. Ieng Sary just went in and out of the country, and Ieng Thirith was only in charge of the social affairs ministry.'
'So it seems to me that they are victims,' he said of the movement's former head of state, foreign minister and minister of social affairs respectively.
The fourth person indicted was Nuon Chea, known as Brother Number Two, and regarded as the movement's chief ideologue.
Mey Mak, who worked for a decade as secretary to the Khmer Rouge's late leader Pol Pot, was speaking at a public meeting in late September in the former Khmer Rouge stronghold of Pailin in western Cambodia.
Senior members of the UN-backed war crimes tribunal had travelled there from Phnom Penh 400 kilometres away to explain the court's work.
Their trip into the movement's old heartland came just days after the court indicted the four surviving former leaders for genocide, crimes against humanity and war crimes.
Across Cambodia their indictments are regarded as long overdue. But that is not the case in former strongholds such as Pailin, where the defendants used to live.
Mey Mak told the audience of several hundred police, military and civilians, most of whom former Khmer Rouge, that power lay in Pol Pot's hands. Therefore trying anyone else was inherently unfair.
His comment drew a dry response from international co-prosecutor Andrew Cayley.
'I certainly anticipate in this trial, as in many others I have done, that responsibility will be laid at the feet of the dead, and the living will claim innocence,' Cayley said.
The court estimates that up to 2.2 million people died during the Khmer Rouge's catastrophic rule between 1975 and 1979. More than a million likely died violently.
But it turned out that the former cadres at the gathering were more interested in another number: How many people does the court want to try? The answer, Cayley told them, is no more than 10.
The first defendant was Comrade Duch, who was jailed in July for 30 years for his role as commandant of the S-21 torture and execution centre. Then there are the four former leaders, whose trial will likely start next year.
Lastly, the court is investigating five more, who remain unidentified.
'Those five may or may not go to trial, depending on the work of the investigating judges and what they find,' Cayley said. 'So with those 10, that is it.'
It is an answer that goes down well in places like Pailin, but which mystifies the rest of Cambodia. How can no more than 10 people be held accountable for so many deaths?
A large part of that answer is politics, which has constrained the court since before its inception. Many senior figures in Cambodia's government were in the Khmer Rouge, and a court with a wide remit might reveal some uncomfortable truths.
Further afield, the United States and China were among the countries involved in supporting the movement at one point or another, but would rather the spotlight shone elsewhere.
Other nations were involved too, but politics has dominated the life of this tribunal. It will likely rear its head again if - as some expect - the court eventually shelves the five new investigations.
Doing so would suit Prime Minister Hun Sen, who has come out strongly against them. And it seems unlikely that many of the court's Cambodian staff would feel comfortable going against the premier's wishes.
Mey Mak suggested the court should focus more on national reconciliation and less on investigating the five new suspects, although he conceded that trying the four ex-leaders fits with the tribunal's legal remit.
'But like me and others, they wanted to escape from the regime and could not,' he said, before asking his home audience: 'How could they have escaped?'
Just how responsible these four were for what happened lies at the heart of the tribunal's second case. But a more pressing fact is that the youngest defendant is 78, and one or more might not survive a lengthy trial.
So there remains the possibility that 67-year-old Comrade Duch will be the only person held accountable for one of the 20th century's most destructive regimes.
Posted by CAAI News Media at 9:40 pm No comments: Links to this post

The CAAI would like to announce that Mr. Mam Sonando, the president of Sambok Khmum Radio, The voice of People is visiting wat Odom Samakum Khmer in Auckland, New Zealand. He will join our kan benda and having a speach tonight. We would like to invite you all to join this special event.
Your Sincerely.
CAAI News Media
Posted by CAAI News Media at 3:59 pm 5 comments: Links to this post

To Gain The Power is To Kill The People? Grenade attack event on March 30, 1997


SunChanthy | September 30, 2010
March 30, 1997 grenade attack event on an opposition rally for judicial system reform in Cambodia led by Mr. Sam Rainsy, President of the Khmer Nation Party in front of the National Assembly building.
Posted by CAAI News Media at 3:51 pm 1 comment: Links to this post

Cambodians Mark the Festival of the Dead


Every September Cambodians around the country celebrate the Festival of the Dead.
Hundreds gather at temples before dawn with offerings of rice balls, small cakes and water which are given to the monks and also dropped on the ground around the temple for the spirits.
Traditions say that some family members become evil spirits after they die because of the bad things they did while alive.
[Prak Bora, Monk]:
"Our people feel pity towards the evil spirits who cannot get good food through the monks’ offerings, therefore they have this ceremony before sunrise to offer food to them so they can have the food to eat."
[Chuop Khon, Festival Participant]:
"I hope what I offered today gets to those who died and may they all live in peace and bless us with good luck.”
Other families brought big cakes, drinks and money to offer to the spirits that roam in daylight.
[Meak Diep, Festival Participant]:
"When the monk offers the food, it gets to our relatives who have died. I truly believe that."
Although the war-scarred nation's annual Festival of the Dead honors all ancestors, it has taken on added significance since the fall of the Khmer Rouge which inflicted years of violence onto Cambodians during the late 70s. About a third of the Cambodian population died.
The 2-week-long festival runs through October 8th.
Posted by CAAI News Media at 7:32 am No comments: Links to this post

Posted by CAAI News Media at 7:21 am No comments: Links to this post

Posted by CAAI News Media at 7:19 am No comments: Links to this post

Posted by CAAI News Media at 7:18 am No comments: Links to this post 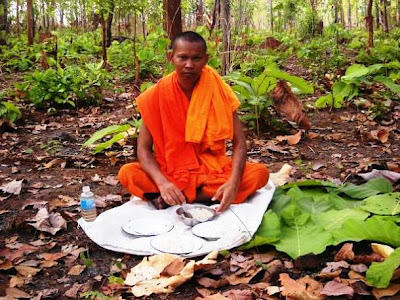 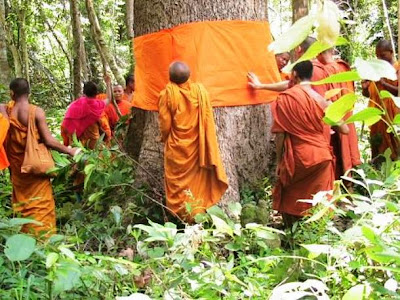 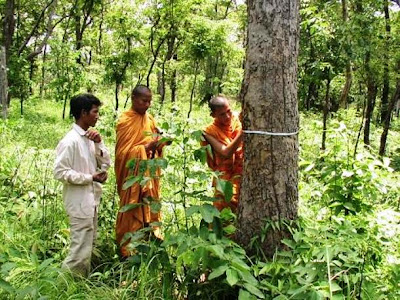 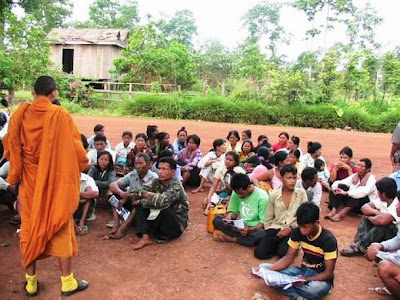 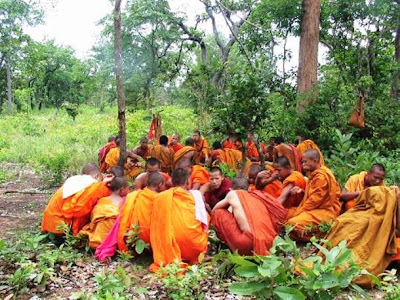 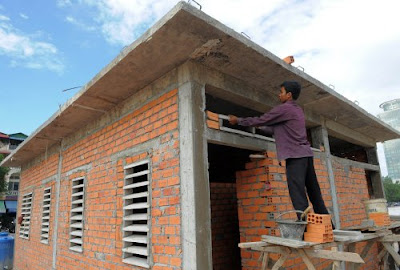 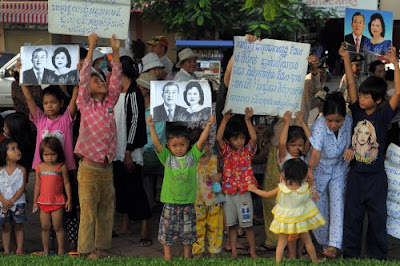 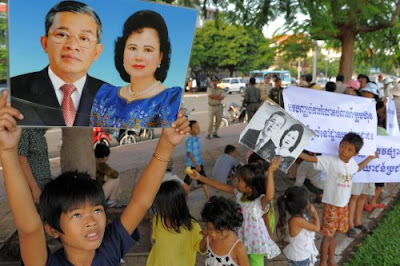 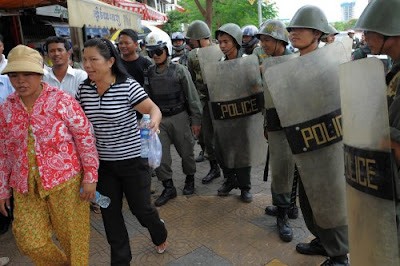 Cambodian women shouting as policemen try to disperse them during a protest in front of Prime Minister Hun Sen's residence in Phnom Penh. Photo courtesy: AFP 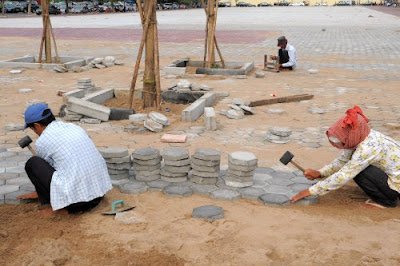 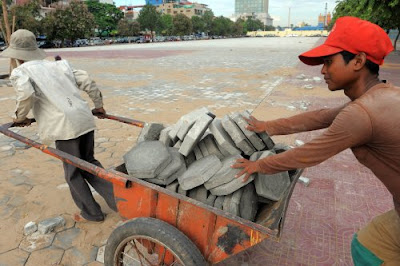 Cambodian workers pushing a cart loaded with bricks for a freedom park in Phnom Penh. Photo courtesy: AFP
Posted by CAAI News Media at 7:06 am No comments: Links to this post