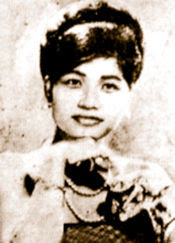 The 'Golden voice' of Ros Sereysothea is undergoing a revival. Credit:Wikipedia
IPS
By Andrew Nette - Newsmekong

PHNOM PENH, Aug 17 (IPS) - Grainy black and white newsreel footage of B-52 bombing raids and fierce fighting are the images most frequently associated with Cambodia in the sixties and early seventies -- not rock and roll, hot pants and wild dancing.

But when the Khmer Rouge took power in 1975, emptying the cities and systematically eradicating the so-called old culture as corrupt and decadent, they almost completely destroyed what was probably, for its time, the most unique and vibrant rock and roll scene in South-east Asia.

"Cambodia definitely had one of the most advanced music scenes in Asia at the time," agrees Greg Cahill, who is currently seeking finance to turn his 30-minute film on the most famous of the era’s female singers, Ros Sereysothea, ‘The Golden Voice’, into a fully-fledged biopic.

"It is amazing that a lot of it survived at all," says Cahill, who was recently in Phnom Penh to scout for locations. "The Khmer Rouge destroyed everything related to the music scene they could get their hands on, including trashing all the recording studios and destroying all the musical recordings they could find."

All the major singers, many of them still household names today such as Sin Sisamouth and Sereysothea, were killed.

Not only has the music survived. Its legacy of thousands of songs ranging over musical styles as diverse as psychodelia and Latin, is garnering increasing international attention.

‘The Golden Voice’ is one of two films on Cambodia’s pre-war music scene in the works. The other, Los Angeles-based cinematographer John Pirozzi’s ‘Don’t Think I’ve Forgotten’, a history of the scene, is currently in production.

Songs from the period featured on the soundtrack of the 2002 crime thriller shot in Cambodia, ‘City of Ghosts’.

It has also been given significant exposure by the six-piece Los Angeles-based band ‘Dengue Fever’, whose lead singer, Cambodian-born Chhom Nimol, covers many of the classic hits from the period.

While the music’s domestic popularity is mostly restricted to older Khmers, the pre-war artists are being sampled and mixed in hip hop and rap music tracks, slowly exposing it to a new, younger audience.

"When I first heard this music, I did not think much of it," says Sok ‘Cream’ Visal. "I thought it was just the style back then."

"The more I listened, the more I realised just how different and edgy this music was," says Visal, art director at a local advertising company who, for the past few years, has been experimenting with remixing pre-war music with more modern sounds. "Thailand, Vietnam and Laos did not have this scene. It was unique to Cambodia."

The first was the patronage of then King Norodom Sihanouk. As part of his post-independence nation-building efforts, Sihanouk encouraged royal court musicians to experiment with new styles.

This influenced people like Sisamouth, whose career started as a ballad singer in the royal court and by the end of the sixties had become the ‘King of Cambodian rock and roll’.

In the sixties, Sihanouk began importing Western music into Cambodia. Local record labels sprung up and by the seventies, these were being supported by a well-developed network of distributors and clubs.

The other major influence was the R and B, country and rock music that was blared into Cambodia by the U.S. Armed Forces radio in Vietnam.

"This exposed Cambodian musicians to Jimi Hendrix, Phil Spector, the Doors," says Visal. "Meanwhile, from Europe we got Latin styles such as cha cha, rumba and flamenco.’

These sounds, as well as influences as diverse as do-wop, psychodelic and Motown, can clearly be heard in the pre-war music, often mixed with traditional Cambodian instruments.

From the royal court, Sisamouth became a popular radio singer in the late fifties, before branching into film and TV. Although he did many rock and Latin tunes, he is better known for his more silky crooner numbers and is often compared to singers like Nat King Cole.

Although Sisamouth was the bigger star, it is Sereysothea who had the greatest mystique and exercises the strongest contemporary interest.

Born into poverty in a small village in Battambang province, Sereysothea spent her teens performing with her family in a traditional peasant band touring Cambodia’s rural backwaters of the north-west.

Her reputation slowly grew and she moved to Phnom Penh and started performing at local clubs. By the late sixties she was a major star, producing a number of albums and starring in films. It was during this time hat she started performing with Sisamouth.

She was married for a time to another singer, Suos Mat, who was incredibly jealous of her success and is said to have beaten her regularly. Sereysothea was subsequently involved with a paratrooper in the Lon Nol army who was killed fighting the Khmer Rouge.

When the Khmer Rouge marched into Phnom Penh on Apr. 17, 1975, Sereysothea joined the rest of the city’s residents in being marched at gunpoint to the countryside.

Sereysothea and Sisamouth in particular were very creative, says Cahill, who has extensively researched the era.

Over the seven to eight years leading to the Khmer Rouge takeover, they wrote, sang and produced about 2,000 songs, often at a rate of one or two songs a day. They also recorded a wide array of covers in English and Khmer.

Under the Khmer Rouge, even the slightest western influence such as speaking a second language, having long hair or wearing flares was enough to invite a death sentence.

Sisamouth was reportedly shot. Sereysothea successfully hid her identity for some time until she was finally discovered and made to perform revolutionary songs celebrating the regime.

According to Cahill’s research, Sereysothea was in a camp in central Cambodia when her real identity was discovered. She was forced to marry one of Pol Pot’s commanders who eventually had her murdered.

The music of the sixties and early seventies is currently available on CD and cassette in markets throughout Phnom Penh. That it survived the destruction of Cambodian culture wrought by the Khmer Rouge is due to Cambodians who took it with them when they fled the country.

"In the Khmer community in Long Beach, California you cannot go down the street without hearing this music," says Cahill.

Visal remembers his parents taking music with them when they fled Cambodia to France. "Music was a part of their everyday lives," he recalls. "For them it was about memories of Cambodia in the good times."

A compilation CD of Khmer pre-war music was released in the U.S. in 1999. Called ‘Cambodian Rocks’, it was put together from cassettes bought by a U.S. tourist during a trip to Cambodia. The CD, which contained no information about the singers or names of their songs, became a cult favourite among college students.

However, it was not until the music was released as part of the soundtrack for ‘City of Ghosts’, written and directed by U.S. actor Matt Dillon, that it started to get serious international exposure.

Visal’s own path back to Cambodia’s pre-war music involved a long detour through the rap and hip that he listened to in the housing projects of suburban Paris.

"I remember seeing the tapes of artists like Sisamouth and Sereysothea for sale in the Phnom Penh in the nineties," says Visal, who returned to Cambodia in 1993. "I did not really pay any attention to the music until I bought a computer to learn design. I stumbled on music editing software and started messing around with sampling Khmer music."

"Soon, I was started going out and combing the markets, listening to every song I could find from this period and I started to mix and sample them," Visal continues. "The first reaction I had from people was shock. They thought it was blasphemy and did not understand why I wanted to do it."

Visal recently started up his own label, Klapyahandz, promoting young Khmer hip hop and rap bands and is keen to release a CD of his mixed songs. "I started remixing old music for fun but now it has become a real mission, trying to remind people now just how creative people were back then."

"In the next five years we are going to see a real explosion of the arts in Cambodia, particularly in music," predicts Visal. "I hope the pre-war songs will be part of that."

(*This story was written for the Imaging Our Mekong Programme coordinated by IPS Asia-Pacific)
Posted by CAAI News Media at 8:44 am