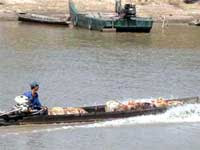 VietNamNet Bridge – Petrol smuggled via borders has reduced by 80 per cent, said deputy director of the Market Watch Department (under the Ministry of Industry and Trade) Pham Quang Vien.

Vien said that though some residents in border areas still brought petrol over the Cambodia border at night, the amount of smuggled petrol had dropped significantly since earlier this year.

He said this was the result of guidelines by the Government’s Steering Committee for anti-smuggling, counterfeiting and trade fraud, and effective co-ordination between customs, border guards, police and market watch officials to synchronously implement solutions preventing petrol smuggling.

The solutions included that petrol stations along border areas could only sell fuel to people travelling in vehicles, not to people with just barrels or oil cans. Authorities would close petrol stations that were unqualified to do this business, or that exported petrol illegally. New petrol stations in the south-west border region would not be allowed to open in order to prevent petrol smuggling in those areas as well.

Currently, petrol stations in border areas are open from 6am to 6pm only, following the times that border gates open and close. From early July, border stations began selling petrol to vehicles migrated into Vietnam at international selling prices.

Vien said that in the first six months of this year, petrol sold at petrol stations in five southwestern provinces had remarkably reduced compared to 2005, when petrol smuggling was at its height.

However, though Viet Nam had increased its petrol prices on July 21, these prices were still lower than retail petrol prices in Cambodia, he said. If price imbalances still existed, authorities would still have to fight against petrol smugglers, he said.

At the end of last month, it was reported that the smuggling of fuel from Vietnam over the Cambodian border had continued despite the recent petrol price increase.

Fuel prices in Cambodia increased to US$1.5 per litre, VND5,000 ($0.3) higher than in Vietnam.
Most of the smuggling took place at night and sometimes during the day, usually by motorboat.
Canvas covers hid the plastic containers that contained the fuel, police said.

In Kien Giang Province, some smugglers pour fuel into nylon bags and lay them on board to transport them more conveniently.

During the flood season, smugglers often take advantage of the local terrain to escape anti-trafficking forces.