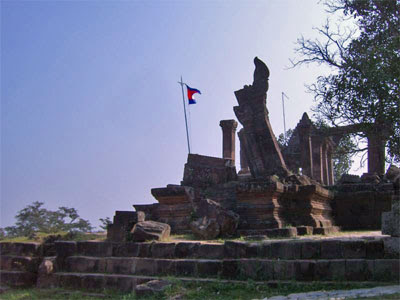 There is a war brewing on the border between Thailand and Cambodia. Thai soldiers have cordoned off the area around the controversial Preah Vihear temple from the outside world. There is no sign that troops have been withdrawn, as agreed earlier by both countries. Nor is there any sign of tourists being allowed to visit the ancient ruin, which recently made it onto UNESCO's world heritage list. The troops have taken their positions - the Cambodians are in the temple, the Thais surround it - and for the last two months each side has been closely watching the other.

"Do you want to meditate?" asks a Buddhist monk dressed in white. He points to a little chapel that he and his followers have set up next to the road block. He has just spent the last half hour listening to his own thoughts there. Which is a wonder in itself as incessant Buddhist singing blares from a car. The volume is so high that it is difficult to hear yourself speak.

Protect the Thais
Only a handful of Thai Buddhists are left over from the thousands who went to Preah Vihear two months ago to claim the temple for Thailand. Some of the demonstrators were arrested by the Cambodians and Thailand sent its troops to "protect the Thais".

The situation was so tense for a while that Cambodia wanted the United Nations Security Council to intervene. The demonstrators were made to retreat 12 kilometres down the road and now there are just soldiers in the area. The last protesters are keeping watch at the road block. "We are trying to resolve the situation through meditation," says the man clad in white.

Border drawn too widely
An "error" by UNESCO has sparked off an old conflict. The Preah Vihear temple has belonged to Cambodia since the International Court of Justice allocated the ruin to the country in 1962. But the border has been drawn a little too wide around the temple on the UNESCO map by a few kilometres. Thailand feels wronged.

The third week in August is the week by which all troops are supposed to have withdrawn, but it looks like no-one wants to take the first step. On the contrary, 300 kilometres to the west - on the same border - troops have dug in at another temple: Tha Moan Thom.

There are not many troops, at first glance. Half a road block is guarded by two soldiers and under a roof in the car park there are a couple more. But around the back, at the foot of the temple, Thai and Cambodian soldiers stand eye to eye on the edge of the woods. The two are separated by barbed wire and a rickety fence made from branches.

Here too the Thais say "the Cambodians" could start shooting at any moment. They are ready and willing. "We would gladly die for our country," they say. There is no shooting and at the top, tourists walk around as normal in amongst the temple stones. But the situation remains tense.

Colonial border
The border between Thailand and Cambodia was drawn more than 100 years ago by the French, who colonised Cambodia at the time. Like many colonial borders, this one was also decided on the drawing board and no one bothered to check where the line should run precisely.

But after the independence of Cambodia in 1953, all this changed. The squabble that began back then has continued right up until today, and each time the issue is raised, nationalist feelings are rekindled.

Four years ago we saw what this could lead to when a Thai actress reportedly told an interviewer that - from a historical point of view - large parts of Cambodia actually belonged to Thailand. As a result angry Cambodians set the Thai embassy in Phnom Penh and other Thai property on fire.

"Blow the whole thing up, like the Taliban did in Afghanistan," says a Thai passer-by on the border.

It wouldn't take a lot for the whole matter to explode. One stray bullet in the woods in Tha Moan Thom would be enough.
Posted by CAAI News Media at 7:18 am