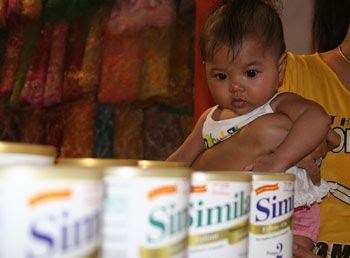 Tracey Shelton; Five-month-old Chivi stares at a display of milk powder in Phnom Penh’s Orussei Market. Officials have expressed concern the country will be targeted by those looking to dump contaminated Chinese milk products.

No tainted Chinese powdered-milk products have been detected yet, but officials fear banned stocks from abroad could end up in markets

AS the toll of sick children from China's tainted milk scandal topped 50,000 Monday, government officials expressed concerns Cambodia could become a target for the dumping of suspect Chinese baby formula pulled from the shelves in other regional countries.

Phnom Penh's municipal health director, Veng Thai, said that although there were no reports of Cambodian children falling ill from the banned goods, the government remains vigilant over their possible importation.

"I am very concerned about the Chinese formula arriving in Cambodia, because I heard the news that Chinese babies were killed and poisoned," he said. "We don't have this kind of formula in Cambodia now, but we have to use all measures to prevent illegal imports."

On September 13, the Chinese government ordered a recall of Sanlu brand milk powder after it was found to be laced with the industrial chemical melamine, resulting in as many as four deaths and 52,857 cases of poisoning. It has since recalled two other brands, while many countries, including Cambodia, have barred imports of Chinese milk products altogether.

Pan Sorasak, secretary of state at the Ministry of Commerce, said the Cambodia Import-Export Inspection and Fraud Suppression Department (Camcontrol) has enforced a strict ban on all Chinese milk products since Friday.

"We don't have this milk product in the market yet, but Camcontrol officials are still checking at markets and supermarkets," he said. "[They] will confiscate this type of milk if it is found in the market."

Ban or no, Phnom Penh retailers told the Post that Chinese milk powder has not been available in Cambodia for many years. Koun Leang, 50, who runs a dry-goods stall in Central Market, said she knew about the tainted milk, but did not know of anyone who was selling it.

"I have worked here since 1989 and never sold any milk powder from China," she said, adding that most brands were from Thailand, Malaysia, France, Holland and the United States. "Most customers are not interested in Chinese products, and I have never seen any advertisements or marketing for Chinese milk powder."

Mary Chea, coordinator of the Ministry of Health's young child feeding program, said she had immediately scoured local shops for the tainted powder upon receiving warnings from the World Health Organisation (WHO).

"I went directly to check some supermarkets in Phnom Penh as well as markets in Kampong Thom to find out if they have that kind of formula, but I didn't see any Chinese products. The Ministry of Health and the WHO are very concerned about this problem," she said.