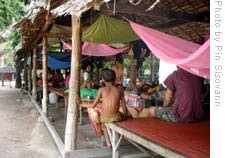 Patients wait for their bones to mend under the thatch roof of "the Great Healer" in Kampeu Speu province.

The wails of a child drifted through the makeshift stalls of the bone mender. Fifteen patients sat in the stalls, where hammocks swung and relatives milled around 10 meters away from a cow shed where a fire was burning to keep away the flies.

The bone mender's name was Var Phom, and people had come from many kilometers away to find him in Baset district, Kampong Speu province, a man they call the Great Healer. They had come to him to heal deep wounds that they could not afford or where afraid to treat at a modern hospital.

Khin Tuch, whose thigh was broken when robbers knocked her off her motorbike, sat among the patients. This was her second trip to the Great Healer, and she said she was confident he would mend her leg in the same way he had treated her broken spine.

"When my spine was broken in three, the blood froze in my belly," she said in a recent interview. "The doctor couldn't help. I came to him. He reached in my belly, like removing a fetus, to remove the blood and made a bandage with traditional herbs."

She was healed at a fraction of the cost of a hospital, and, when she was able to walk again, Var Phom asked her for a voluntary fee, one she could afford and gladly paid.

"I am not afraid of surgery," she said, "but I am poor, so I have the traditional healer who charges cheaply."

Khin Tuch is not alone in her trust of traditional healers. In a country where confidence in the health sector is sorely lacking and many people continue to live below the poverty line, they can be the best option.

"I think to have traditional treatment to fix our broken bones is quick and effective," Khin Tuch said. "I've been to the hospital too, but it is good at curing wounds and injuries to internal organs. A Khmer traditional healer is effective fixing broken bones."

Nearby was Chan Lun, who had brought her dislocated wrist to Var Phom.

"He is really an effective traditional healer," she said. "He is extraordinary in curing broken bones. I've heard complaints from people who had problems with surgeries. I'm frightened by
surgery, suffering, not about its cost." 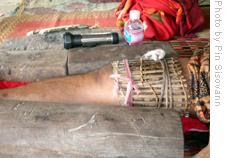 Despite such faith in traditional methods, Dr. Veng Thai, head of Phnom Penh's health department, said there was a limit to their healing capabilities, including bone menders. The break must be simple, without complications to the flesh, veins or nerves, he said. Then, a mender can set the bone, allowing the body to heal itself properly.

A hospital can do the same, he said, and a fear of surgery among people can be unfounded.

"When one comes to the hospital, we would not undertake surgery if the break was simple," he said. "The doctors would only straighten and fix the bone."

He cautioned against avoiding surgeries when they are necessary, when the injury is complicated and blood can coagulate. In such cases, traditional healers can be dangerous. Herbal concoctions that are not sterile can cause a wound to deteriorate, or worse. In the case of a broken spine, the wrong procedure can lead to paralysis for life.

In the case of Khin Tuch, he said, he doubted her spine was actually broken. It may have been a lighter injury, or a dislocation.

Back at the Great Healer's, far from hospitals and their scanners, surgeries and the metal pins and screws doctors sometimes use to treat breaks, Grandma Seur, wife of Var Phom, sat chewing betel nut and mashing herbs in a mortar.

"For warming up bones that have been broken for awhile," she said.

Var Phom had been a healer for more than 50 years, she said. The thatch ward had at least ten patients at all times. Cured patients left, new patients came.

"I don't know how patients know and continue to come, more or less," she said. "One or two every day. Two patients leave, three come, or the other way around."

Behind her, one of those patients was Sam Ath, who sat swatting insects and scratching his thing. He had come nine days ago to have his leg mended, after the hospital told him it needed amputated. He would be home in a week, cured, he said.

(In Phnom Penh, Veng Thai said a hospital would only decide to amputate if a broken leg when the arteries that supply blood to the limbs were pinched off, causing gangrene.)

As for the Great Healer, he said he inherited the secrets of bone mending from his father, using traditional herbs and magic from spirits that possess him. When patients show him an X-ray from the hospital, he says he needs no film to tell him where the breaks are.

"I learned it myself. I learned two courses from my father. Spirits possess me. As soon as I see a broken thigh, I know what to do," he said.

Pressed on how he really learned his craft, he said: "Healer from heaven, healer for vehicle." And then he said destiny had chosen his daughter, Phon Sitha, to be trained.

Most patients come out of hospitals, Phon Sitha said, and she never left a patient uncured. When patients are ready to leave, they pay a minimal fee, though they are not charged, as per the rules of spells spoken in the Pali language. Some pay as little as 10,000 riel, about $2.50, for treatment.

"It is not the herb alone that cures the bones, but Khmer traditional magic. Spells too," she said. "Now my dad leaves the work to me. I try step by step. He helps me some and I cure patients by myself."

It is not always easy. Traditional herbs are getting harder to find these days, she said. Some of them are sought by grazing cattle.
Posted by CAAI News Media at 4:52 pm