The NEC should announce the official election results tomorrow 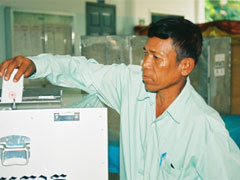 The National Election Committee is waiting for a confirmation from the Constitutional Council in order to officially announce the definitive election results, which could happen today.

According to Tep Nitha, General Secretary of the NEC, the Constitutional Council should inform him on Monday that he has solved all the complaints regarding the elections. Tep Nitha specifies that “as a result, the NEC will be able to announce the election results from Tuesday morning onwards”. Keo Phalla, in charge of the complaints office, declares that hundreds of complaints made during the election campaign have been solved. He reveals that he “now takes care of administrative formalities such as the drafting of lists of elected representatives…”

The definitive results, ready to be announced by the NEC, should thus not differ from the preliminary results, in other words a landslide victory for the CPP. The SRP and HRP have decided to submit their dispute in front of international courts. They spoke to the 1991 Paris Agreements signatories, particularly to the co-chairmen like France and Indonesia, with the hope of receiving support. Both opposition parties accuse the CPP of election fraud. They’re demanding a revote in several polling stations.
Posted by CAAI News Media at 5:10 pm