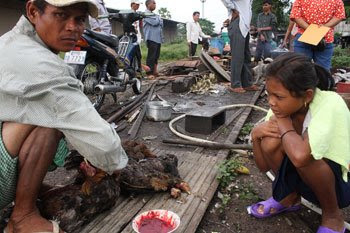 Cambodia's widespread trade in live chickens and ducks poses a health risk; it is the easiest way for bird flu to spread

THE sixth market forum to educate poultry vendors about bird flu prevention and to encourage good sanitation practices was held on Friday at Phnom Penh's O'Russey market by the government and 14 NGOs.

Mok Chanthol, an official at the National Veterinary Research Institute (NAVRI), said that the number of cases of bird flu in Cambodia could increase in the future if poultry vendors, particularly those selling live chickens and ducks, did not follow good sanitation practices.

"Our purpose is to urge business people, rural doctors and farmers to have more understanding of bird flu and good sanitation," he said.

He added that the campaign was held at O'Russey Market because it is a popular place to buy and sell live chickens and ducks.

Sok Touch, director of the Communicable Disease Control Department at the Ministry of Health, said that after distributing information about bird flu in a number of provinces, his department is planning to implement an educational program to help prevent human-to-human infection.

"We are planning programs to prevent human-to-human infection because we currently only have measures to prevent transmutation from birds to people," he said.

Sixteen educational forums on bird flu have now been held in provinces across the Kingdom, according to a report of the Ministry of Agriculture, Forestry and Fisheries.

The report says that 40 percent of Cambodians have a good understanding of sanitation, but the remainder still need to be educated about clean practices and bird flu.