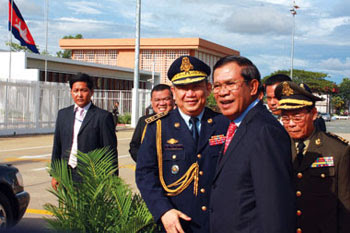 PRIME Minister Hun Sen emerged from Friday's border talks with his Thai counterpart, Somchai Wongsawat, in good spirits but with little real progress having been made on resolving a three-month-old military standoff over disputed territory, officials said Sunday.

Both sides did agree to try to prevent a repeat of the deadly October 15 shootout near Preah Vihear temple that brought the two sides dangerously close to open conflict.

"The prime ministers' meeting was very friendly and they agreed to avoid further clashes among the military stationed along the border," said Minister of Commerce Cham Prasidh, who also attended the meeting held on the sidelines of the Asia-Europe Meeting in Beijing.

"And again we have increasing cooperation and negotiation in all sectors," he added.

"This meeting couldn't solve the problem of troop withdrawals. We just tried to work to prevent any clashes in future," said Sok Pheap, chief of the Cambodia-Thai relations office.

The brief firefight earlier this month was the worst outbreak of violence since the standoff began in July.

It sparked a further buildup of troops and equipment on both sides of the border, despite international pleas for calm and promises of more diplomacy from the Cambodian and Thai governments.

Foreign Minister Hor Namhong said upon returning from China that the two sides will meet again on November 10 in Thailand for talks on demarcating the poorly defined border between the two countries.

Tensions flared in July shortly after the 11th-century Preah Vihear temple was listed as a Unesco World Heritage site, angering Thai nationalists who claim the ruins belong to Thailand.

The temple sustained damage during the October 15 fighting, and officials said that the government has lodged a complaint with Unesco over the incident.

"The Preah Vihear authority has sent reports and pictures of the damage to Unesco," Council of Ministers spokesman Phay Siphan said Sunday.

ADDITIONAL REPORTING BY AFP
Posted by CAAI News Media at 7:22 am