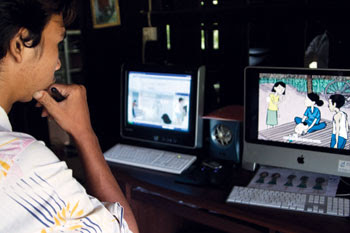 Photo by: VANDY RATTANA; An animator at Cambodia’s first animation studio works on a commercial project – a public awareness short for a local NGO.

Since it opened in January 2007, the small animation studio at the Phare Ponleu Selpak Association (PPSA) - a few minutes from the centre of Battambang town - has built a commercial reputation by producing animated public service announcements for NGOs and other organisations. Their success has inspired the studio to start work on its first independently-funded short film.

Situated on the campus of PPSA, better known for producing local artists and acrobats, the animation studio is growing in stature on the reputation of director Poy Chhunly, 27, who won a number of awards last year for his short public awareness film Little Boy Drinking Bad Water.

The new film, a pre-colonial tale of two children travelling the country to seek a cure for their mother's illness, has no official completion date, but PPSA coordinator Jean-Christophe Sidoit expects the 10-minute feature to be completed in around 18 months, with the storyboard to be finalised in late March 2009.

A message that matters

Poy Chhunly is training a team of seven to complete the film, the script of which he co-wrote with the school's head drawing instructor, renowned artist Srey Bandol. The story's setting, which will alternate between the 13th and 17th centuries, necessitated that the authors approach local experts for advice in order to make the animation as true to life as possible.

"We want this animated film to be accurate in terms of culture and history," Sidoit said.

" We want this animated film to be accurate in terms of culture and history. "

The Royal Academy of Fine Arts sent historian Ros Chantrabot to the studio to answer questions pertaining to the period's culture and society. But for Ros Chantrabot, the commercial success of the film will depend on the message, not just the historical details.

"I believe that we share the same ideas on the main messages we have to pass to children - for example, to convince them to be persevering and courageous," Ros Chantrabot said.

At PPSA animators are required to undertake at least five years' study with the school's drawing instructors before joining the commercial animation team.

Chim Li, 24, who has been at PPSA for six years, watched as a four-second fragment of animation played repeatedly on his computer screen. The studio pays its way with its NGO work - currently, they are working on four animation shorts commissioned by Oxfam, focusing on the theme of human rights in Cambodia.

Last week, the studio was hard at work on a three-minute film about four ek chay - children who survive by collecting and selling garbage in the city.

On Chim Li's computer, cartoon children walked in from the right of screen, while a little boy ran across from left to right. In the background a woman gave a package to her husband, and three birds alighted from a nearby tree. The scene seems simple, but Chim Li's role is to put colours inside line drawings and to check each movement again and again for any errors - a painstaking process.

Before the drawings are transferred to computer, the scenarios are sketched out on paper. The characters are drawn so as to be immediately identifiable to the public.

"Without a clear expression, there is no life in the characters nor in the film," Poy Chhunly said.After the drawings are digitised and the colour and movement added, the animators then have to edit the film and record voiceovers, sound effects and music.

"We have to put ourselves in the public's shoes to make sure they will understand everything," Poy Chhunly said.

It is a labourious way to produce a short cartoon, but the animators have succeeded in injecting a real Cambodian style into their films.

For Poy Chhunly, who cites the animation of the Japanese master Hayao Miyazaki as well as state-of-the-art American features like Shrek as inspiration, PPSA's work is managing to achieve about half of what Disney can with just a fraction of the resources.

Although he anticipates having to continue producing public awareness shorts to pay the bills, he believes that with an ambitious young team on side and a steady flow of work to keep them in business, Cambodian animation can achieve both creative and commercial success.
Posted by CAAI News Media at 11:19 pm