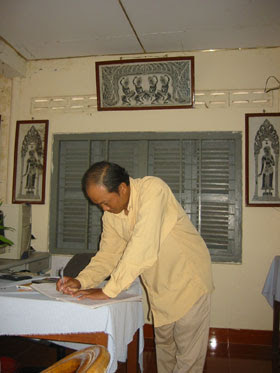 From land-grab cases to criminal defence, NGO-funded lawyers seek justice for the indigent

HUY Vannara is a scarce resource in Siem Reap. He's a lawyer. Not only that, he's a lawyer for the poor.

He works for an NGO, in the local office of the Phnom Penh-based Cambodian Defenders Project. Along with another lawyer, a receptionist, and two interns, he provides free legal services to indigent clients in Siem Reap.

This small office has over 130 open cases, which concerns Huy Vannara because his colleague is leaving at the end of the year, and he speculates it's because of the low salary.

There are three main organisations providing free legal services in Siem Reap: Cambodian Defenders Project, Legal Aid of Cambodia, and Avocats Sans Frontiers (Lawyers Without Borders). They each maintain a small staff, provide funding for both civil and criminal cases, and are finding it increasingly difficult to manage the growing need for lawyers for Siem Reap's poor.
In Siem Reap province, criminal cases and land disputes occupy the largest percentage of cases seen by pro bono lawyers.

"Many people have land disputes with those who have a lot of power," said Chum Sopha, a legal assistant at Legal Aid Cambodia. "They cannot pay their own lawyers, and so they come to us."

Land disputes often arise when upper-class individuals claim to own the actual title to land occupied by others and then sell that land, forcing its inhabitants to move.

"People steal land and then claim to be the real owner, but of course they are not," said Bunphann Phou.

m, a lawyer who contracts with the French organisation Avocats Sans Frontiers to represent indigent clients. "Representing the poor in land disputes is very difficult."

Unlike the penal code, which waives court fees for poor defendants, the civil code in Cambodia requires poor citizens to pay $15 in court fees and taxes in order to defend their land.

"Often they cannot pay these fees, and we have no funds to pay for that," said Bunphann Phoum. He also noted that the courts in Siem Reap have so many pending cases that they may set aside for long periods of time those that judges do not deem important. More money is sometimes required to expedite the process and resolve these cases.

In addition to Bunphann Phoum, Avocats Sans Frontiers employs one other lawyer in Siem Reap province who handles mainly criminal matters. "The Cambodian penal code guarantees a lawyer to all defendants, even if they cannot pay," said Bunphann Phoum. The lawyer handles about 40 cases each year, including rape, robbery and murder trials. Domestic violence is a significant problem in Siem Reap, especially for those who live in isolated rural areas.

"Those who live far away from others find it easy to commit crimes and keep them secret," Bunphann Phoum said, noting that he had recently handled a case in which a father had raped his own daughter.

Legal Aid of Cambodia runs a Women's Justice Program in Siem Reap to represent women in cases of rape, domestic violence and trafficking. Legal Aid of Cambodia, the Siem Reap office of which has two lawyers, two legal assistants, and an investigator, is mandated to represent indigent clients in 45 cases each year, with 20 cases related to its Women's Justice Program and 25 general cases.

"We take cases from all poor people, both offender and victim, depending on who comes into our office first," said Chum Sopha. This year, the Siem Reap office has handled 38 general cases, many on referrals from other NGOs. "We're already over the policy ceiling, but we cannot turn people away."

Although highly motivated, Siem Reap's public interest lawyers handle an overwhelming case load. According to Bunphann Phoum, one solution, besides the additional lawyers that he has requested from Avocats Sans Frontiers, is education. "We need to educate people about crime and its consequences," he said, "in order to reduce crime and the need for court-appointed lawyers."
Posted by CAAI News Media at 11:29 pm