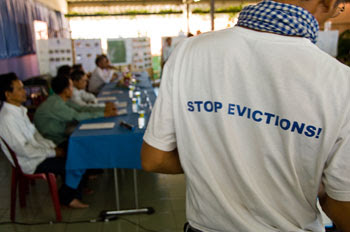 Photo by: CHRISTOPHER SHAY; Hor Samath, spokesman for a group of Cambodian communities under threat of eviction, attends a news conference Thursday.
THE PHNOM PENH POST

Saying their livelihoods are at stake, members from eight communities gather in the capital to submit complaints

IN a show of solidarity, villagers from eight provinces came together Thursday to support eight communities that submitted grievances to the government about land concessions they said violate Cambodian law.

Representatives from the Ratanakkiri, Mondulkiri, Kampong Cham, Kampot, Pursat, Kratie, Kampong Chhnang and Preah Vihear provinces lodged official complaints about land concessions to the Ministry of Agriculture, Forestry and Fisheries, the Council of Ministers and the prime minister's Cabinet.

Following the submission of their complaints, the Community Peace Network, a consortium of communities affected by government land concessions, held a news conference where a representative from each of the eight communities detailed the situation in their province.

According to the complaints, which were made available at the conference, the government has given 480,395 hectares of forest and fishing areas to nine companies.

The complaints involving the largest tracts of land came from Kampong Chhnang and Pursat provinces, where the government allegedly ceded 315,025 hectares to two companies, Pheapimex and Boo-young Khmer.

The event was organised by the communities themselves not by a Western NGO, those present said, athough a few NGOs were in attendance to show their support.

Ou Virak, the president of the Cambodian Center for Human Rights, said: "The fact they [the communities] are taking the lead is crucial in the long run".

"Land issues have become serious in our communities." Seng Sok Heng, a representative from the Community Peace Network said, "There have been no solutions at the local level, where authority supports only the powerful people.

"In June, the communities filed a joint complaint to the Agriculture Ministry, but no one has looked into the case, he said.

Chan Sarun, the agriculture minister, said he received the complaint. "Our officials are working with the villagers to find a solution," he said.
Posted by CAAI News Media at 11:12 pm