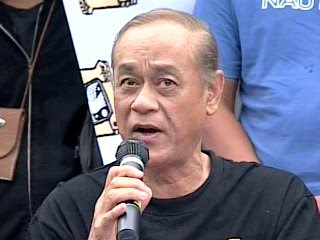 Mr. Pipop said he expected the gathered protest leaders to decide Monday whether or not to invest parliament when both houses confer on a plan to amend the 2007 Constitution and also consider Friday's preliminary agreement reached by senior Thai and Cambodian army officers on ways to ease border tensions related to the 11th century Preah Vihear temple.

If the march does occur, it would be exactly three weeks after the PAD supporters clashed with police at the confrontation at Parliament in which two persons died and nearly 500 others were injured.

However, Mr. Pipop said he believed the government plan to amend the constitution, drafted under the interim military-installed government following the 2006 coup, will be difficult and more domestic political conflicts would be seen if it is rewritten.

According to some observers, the planned amendment is not meant for political reform but rather for issuing an amnesty for politicians, especially tailored for ousted prime minister Thaksin Shinawatra who is now living in Britain.

Former deputy police chief Pol. Gen. Salang Bunnag has postponed his planned foray of pro-government activists to lay siege to the PAD-occupied Government House. Mr. Pipop said the Peoples Alliance for Democracy believed that the police were behind the plan. He emphasised that such a move would automatically make Gen. Salang's group a tool of the government, which would futher discredit their reputation, which he said had already suffered due to the deadly police action against the protesters on October 7.

He said the PAD would try to prevent violence from occurring again. (TNA)
Posted by CAAI News Media at 8:31 am