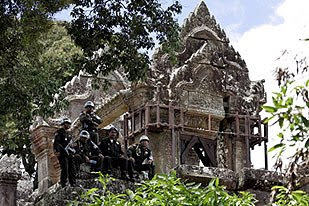 Thousands of Thai and Cambodian troops have been facing off across the disputed border land [EPA]
AL JAZEERA
Friday, October 24, 2008

Thailand and Cambodia have put the issue of a deadly border dispute behind them and are now "good friends", officials have said following a meeting between the leaders of the two countries.
However, military officials from the two sides holding separate talks have said they will stand firm in their positions.

Somchai Wongsawat, the Thai prime minister, and his Cambodian counterpart Hun Sen met for talks on the issue on Friday on the sidelines of the Asia-Europe summit in Beijing.

Speaking after the meeting, foreign ministers from the two sides said they had agreed to take steps to avoid future armed clashes over the issue.

He said the two leaders had agreed to resolve the feud amicably for "the sake of our neighbourliness."

Earlier this month three Cambodian soldiers and a Thai soldier were killed in a firefight close to the 11th century Preah Vihear temple which straddles their common border.

The meeting in Beijing came as military officials from Thailand and Cambodia held separate talks in the Cambodian town of Siem Reap.

The talks between top military commanders began over a round of golf and continued into Friday under what Thai Lieutenant General Wiboonsak Neeparn said was a "friendly atmosphere".

However, a statement released by the Thai military delegation insisted that Thailand's soldiers would stand firm.

"The Thai side strongly reiterates that the position of our troop deployments is clearly inside Thai territory," it said.

Last week, a day after the violent clashes between the two sides, Cambodian and Thai military officials agreed to hold joint border patrols in a bid to ease tensions.

But Cambodian commanders have since backed out, saying such patrols are not possible in disputed areas.