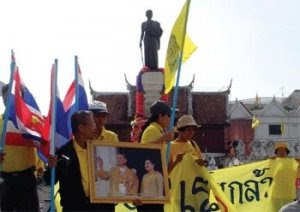 Thai anti-government protesters gather in front of the Lady Mo monument in downtown Nakhonratchasima city, northeast Thailand. Even the protesters follow the tradtion of showing loyalty to the crown; the group carries portraits of Thailand's king and queen. They also wear yellow, the king's color. (Photo/Frank G. Anderson)
UPI Asia

Nakhonratchasima, Thailand — Once again, Thailand finds itself in an embarrassing spat with a “friendly neighboring country.” This time it is Cambodia, regarding Khao Preah Viharn, the 1,000-year-old temple ruin located on the Thai-Khmer border. Soldiers from the two countries fired at each other across the border on Wednesday, leaving two Cambodian soldiers dead and 10 Thais captured.

Conflicting claims have rankled since even before UNESCO granted the site World Heritage status, at the request of Cambodia, earlier this year.

The latest clash follows earlier, repeated, border spats with Laos, and with Burma. It leaves one wondering about the Thai Way of foreign policy.

Over the centuries, in fact, Thailand’s longstanding approach to foreign relations has been to get entangled as much as needed to serve private interests, and to deny entanglement and blame the other side whenever consequences come home to roost.

Also, authorities are quick to cite nationalism when innocents, like villagers living near the borders, are forced to suffer consequences of unwise foreign relations.

Thailand’s foreign policy approach has been painted by the diplomatic corps and the media as a traditionally wise one that shrewdly played off one powerful foreign interest against another – in the Thai Way – to preserve the status quo, or to refrain from rocking Thailand’s socio-political boat. This worked well, on the surface, with older powers like France and England, but broke down in dealing with the United States and much more importantly, with Thailand’s oft-referenced “friendly neighboring countries” – Cambodia, Laos, Burma and Malaysia.

Its failure has also extended to China, but the Thais refuse to recognize this. With the Chinese dominance in business, government, society and economy, it is hard to deny that Thailand has now been colonized. The fact has made itself known time and time again. Even when the Dalai Lama attempted to visit this predominantly Buddhist kingdom, he was not permitted to do so because of Chinese government objections. China has interfered in other Thai domestic issues by forcing the Thai government to stop anti-China demonstrations, most notably by the Falun Gong group, which should be permitted to practice its creed in Thailand, but is not.

With much more powerful countries such as the United States thoroughly undermining their own international strategies and goodwill in the foreign arena, it perhaps seems unfair to cite Thailand’s failures in this regard. Yet it is important to recognize that there is a problem, and a long-term one, in the Thai Way of dealing with others. For Thailand, the costs are much more significant than for powerful countries, particularly in the human rights arena.

When the administration of U.S. President George W. Bush told former Prime Minister Thaksin Shinawatra that Thailand’s reputation in the human rights area was being damaged by his war on drugs, Thaksin shot back, “The United States is a useless friend.” He flippantly continued extrajudicial killings of suspected drug dealers.

When Thaksin secretly made deals with Cambodia, Burma and Laos for his own interests, the Thai public and media remained obedient in not asking penetrating questions. When the entire world has pointed to Thailand’s repeated historical state-sponsored anti-democratic violence – particularly during Octobers – complaints and appeals have been unanswered, rejected, countered with Chinese-style propaganda, or otherwise construed as interference in Thailand’s domestic affairs.

Both its internal and foreign policies seem to be having short-term and long-term detrimental effects on Thailand’s people, its economy – save for tourism – and its value system. Thailand’s current altercation with Cambodia therefore bears review.

Differences between Thailand and Cambodia are real, longstanding and important. Yet they have often been swept under the carpet, particularly with regard to human rights issues and any semblance of democratic reform, because powerful political personal interests stand in the way of ironing out issues that would benefit the general public. This tends to undermine the images of the nations that the rulers claim to serve. Is there any hope for the millions in this part of the world who are daily subject to powerful whims and wantonness?

It is important for both Thailand and Cambodia that the bureaucracy, police and military be under the control of the civilian government, not subject to the political whims of powerful people. Even with quasi-civilian control, the deep-reaching influence of powerful military and royalist figures forestalls any real change toward international standards of freedom, transparency and good governance.

Nationalist images, the sporting of royalist colors and clothing, citations of loyalty to the kingdom, crown and religion, all proceed on a blind progression into the future. Unless Thailand’s reform process subordinates the military to civilian rule; unless Thailand’s domestic policies change to allow provincial governors to be elected rather than appointed; unless Thailand’s voting process is reformed so that local politicians owe their loyalty to the electorate rather than to their party; Thailand’s future is dark and hardly beneficial to the majority of its people – all of whom deserve better.

--
(Frank G. Anderson is the Thailand representative of American Citizens Abroad. He was a U.S. Peace Corps volunteer to Thailand from 1965-67, working in community development. A freelance writer and founder of northeast Thailand's first local English language newspaper, the Korat Post – www.thekoratpost.com – he has spent over eight years in Thailand "embedded" with the local media. He has an MBA in information management and an associate degree in construction technology. ©Copyright Frank G. Anderson.)
Posted by CAAI News Media at 1:20 am