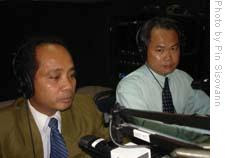 The government had taken many efforts to alleviate the impacts of inflation on the poor this year, said Vong Sandab, deputy director-general of the Ministry of Finance, who is in charge of distributions, as guest on “Hello VOA.”

The ADB and government set out last week to distribute $40 million in emergency aid to people hard-hit by rising fuel prices in seven provinces, but many villagers complained the rice and other foodstuffs were not reaching those in need.

Vong Sandab and Long Piseth, project manager for the ADB, who was also a guest, said they would investigate through neutral monitors.

“The poorest families received the donations,” said Long Piseth.
Posted by CAAI News Media at 8:12 am