Cambodian public in the dark on development goals 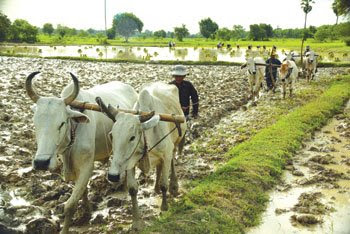 Photo by: Heng Chivoan
Farmers plow their fields in rural Cambodia. Poverty rates in Cambodia remain high, despite international commitments under the Millennium Development Goals, which would see better services for the country's impoverished.
The Phnom Penh Post

ASURVEY released on Thursday by the Economic Institute of Cambodia (EIC) found that many Cambodians could not accurately define Cambodia's Millennium Development Goals (CMDG), and that the majority had never heard of them.

"The study found that the awareness about the CMDG at the local level was remarkably low, as most respondents were either not aware of them or had only a limited understanding," the survey said.

"Fifty-nine percent of respondents had never heard of them."

The survey also found that "only two percent of respondents could correctly explain the CMDG and their purpose". While awareness was low, almost all participants in the survey agreed that the program was important in guiding the development of the country, and that the media played an important role in spreading awareness about it.

Chea Chantum, director of the Planning Ministry's Social Planning Department, accepted the survey's findings but said there were problems in the study's methodology.

"The sample size was relatively small and could not fully represent a given province or the whole country, though the results seem to indicate they do represent the whole province or country," he said.

The EIC's Sok Hach acknowledged the sample size was small but said "our financial resources are limited, so we cannot conduct [studies] as big as those of the Ministry of Planning".

Sam Rainsy Party lawmaker Son Chhay said Thursday the groups selected for the survey were not the most appropriate targets.

"The survey of the CMDG must be conducted among parliamentarians and government officials, as well as provincial governors, because these groups are the ... doers to achieve the goals, not grassroots people," Son Chhay said.

He added that awareness of the millennium goals remain low among parliamentarians.

"According to my estimates, about 10 to 15 percent of parliamentarians have clear knowledge of the CMDG, and most ministries are not even interested in [them]," he said.

The UN's Millennium Development Goals are a list of eight international development goals agreed to in 2000 by 183 UN member nations that aim to address issues of poverty, health care, environmental sustainability, gender equality and the establishment of a global partnership for development by 2015.
Posted by CAAI News Media at 9:52 pm