Looking back at a week in the press always presents the challenge to either lift up one exceptionally interesting or important issue, or to see the links between seemingly unrelated affairs and bring them together, showing how they are positively related or in mutual contradiction.

There have been a series of celebrations during the last two weeks – celebrating the Royal Coronation of King Norodom Sihamoni, then the Royal Birthday of the King Father Norodom Sihanouk, remembering that Cambodia became independent from France 55 years ago, and finally the Water Festival.

Now it is time to wake up to the bitter realities we are facing.

The Minister of Commerce, Mr. Cham Prasidh, is quoted to have made some frightening but probably realistic statements at an international meeting: “While the world moves toward a very painful financial crisis… and the volume of exports goes down which make many people around the world to fall into poverty… only those who can adapt themselves to these changes can escape from poverty.”

But there was not much said about how this adaptation can be achieved, except that “it is crucial to make joint efforts, so that our country is rightly and surely known and supported by developed countries.”

Looking into the international press, what points catch the attention about Cambodia?

- Cambodia is among the Least Developed Countries in the ASEAN region, where 69% of the citizens live by earning less than US$2 per day.

- Cambodia has a “plan to double the expenses for the military sector” - an idea that is proposed by the government and welcomed also by the opposition party – though the Minister of Economy and Finance questions where the US$500 million will be taken from.

- There are regularly reports about alleged criminal actions by persons in, or related to public office – for example, a military officer of the Ministry of Interior is accused of grabbing land; a Poipet immigration police chief continues to demand US$5.75 each from Khmer workers coming back from Thailand - and often there is no follow up that a prosecutor started to act, that investigations were started, and that a case was brought to an end. The reputation that there is a lot of impunity in Cambodia is on-going.

- It is highlighted that, among the different unsolved points in negotiations between Cambodia and Thailand, one that created tension was Cambodian opposition to the Thai idea to put, after the (Khmer) words “Preah Vihear” also the words “Pra Viharn” (in Thai). With this kind of resistance to cooperation and understanding for the other side’s position, how will it ever be possible to comply with the UNESCO World Heritage Site condition, which is to present a Progress Report in February 2009 about the management plan which has to be “produced jointly by Cambodia and Thailand” for the 2010 session of the World Heritage Committee? The Cambodian media have hardly informed the public that the Cambodian negotiators promised to develop joint management. And we have still not seen that any media in Cambodia have published the UNESCO documents saying that “the core area has been much reduced and now only includes the temple and its immediate surrounding and not the wider promontory with its cliffs and caves.” The accompanying map was produced by the Cambodian side for the negotiations and accepted by the Thai side. The Khmer press also disregards that the final Cambodian map and documents suggested listing Preah Vihear “without at this stage a buffer zone on the northern and western areas of the Temple” - the areas where there has been military confrontation. - It is difficult to hope for a positive international response to the plea of the Minister of Commerce - “so that our country is rightly and surely known and supported” - as long as the commitments made by the representatives of the Cambodian government, such as those in the Preah Vihear case, are not acknowledged or discussed by the national press and the public. The international community may also wonder about why and how this issue became so hot, and how it has been handled. Nowadays the Preah Vihear Temple is discussed as if it had been of great concern to the country since time immemorial. However, a map of Cambodia, printed in 2000 by the official geographical agency of the government, does not even mention the Preah Vihear Temple location at the border, even though it is in a province of the same name. That the border was not of much concern until recently is also obvious from the situation found: previously, the site was well visited by tourists, peacefully, and with mutual benefit. The approach was summed up: “There Should Be 73 Khmer-Thai Border Markers - 29 Markers Are Found, 19 Are Being Checked, and 25 Are Being Sought.” Who cared in the past? 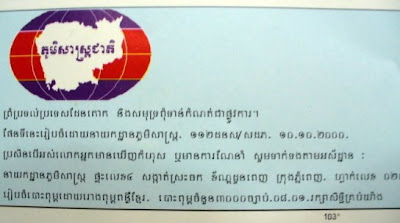 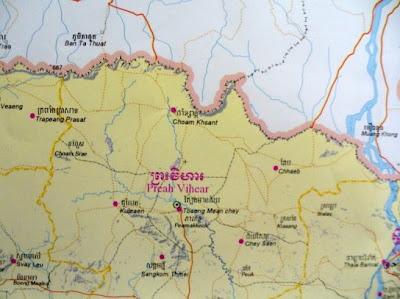 The Province of Preah Vihear with the Thai border - no reference to the Temple
- Finally, there has been a mixed reaction to an agreement between the Cambodian and Vietnamese governments that soon no visas will be required for travel between the two countries. Such an achievement might be welcome – especially given the fact that 20,000 more Cambodians went to Vietnam in 2007 than the 120,000 Vietnamese that came to Cambodia. But some see such developments – which are in line with general ASEAN goals – as a danger. This week’s press includes fears that “more Vietnamese can use passports without visas to come to live in Cambodia illegally.” Actually, an entry without visa does not give residence rights. When the press mixes these two situations they, create unnecessary confusion. Given the frequently expressed regrets about the culturally isolated situation of the Khmer speaking minority in Vietnam, one might have thought that lifting visa requirements would have been welcome, as it will facilitate mutual visits. Also, it will help the many Cambodians who travel to Vietnam for medical services. Objective observers might also welcome the current negotiations for Vietnam to sell electricity to Cambodia at a wholesale price of US$0.05; in an area in Kompong Cham, electricity costs up to US$1.25 per kilowatt/hour, and a businessman has been criticized for adding the costs of transport to the cost of fuel sold in the province of Mondolkiri.

The call by the Minister of Commerce that “it is crucial to make joint efforts, so that our country is rightly and surely known and supported by developed countries” is important not just in general, but particularly with regard to Cambodia’s neighbors. Economic development to alleviate poverty, and also other kinds of progress, depend on whether the international community sees a movement towards peaceful and friendly relations. No country can thrive in isolation.
Posted by CAAI News Media at 4:38 pm