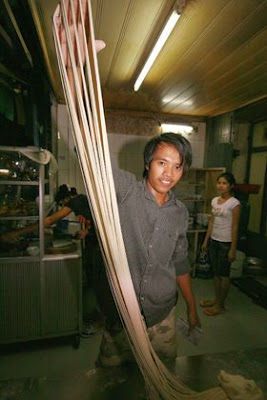 Chinese Noodle Restaurant and its sister establishment, Chinese Pulled Noodle, may be the only places in Phnom Penh to dine on hand-pulled noodles

ONE of the most popular Chinese noodle restaurants in Phnom Penh is called, simply enough, Chinese Noodle Restaurant, and most evenings the place is packed with ravenous punters.

La mien is the specialty of the house, la meaning pull and mien meaning noodle. Pulled noodles are a popular traditional Chinese dish, and judging by the clientele of the Chinese Noodle Restaurant, Khmer and foreigners like them too.

To get a better idea of what goes into these la mien dishes, we talked to a professional noodle puller, To Besyrana. The 20-year-old has been pulling noodles for seven years and learned the trade from his brother.

He says that while most of the technique take two or three months to learn, he learned the sweeping, nimble-fingered gestures in less than a week.

Healthy alternative
"Chinese noodles are different from all the other noodles because our noodles do not have chemicals or oil," he said. "We make the noodles by hand daily [in front of the restaurant] and they are always fresh. But the other noodles that you can buy in Cambodia contain chemicals and oil so that they keep for long time.

"Pulling noodles by hand looks like hard work and reminds one a little of throwing pizza dough. The puller has a ball of dough that he constantly flours to keep from sticking, and they quickly pull and spin it into 180 noodle threads. To Besyrana said the work makes him strong.

The noodles are made from eggs, salt, water and flour, and after they have been pulled, they are thrown into a pot of hot water to cook.

The most popular dishes at the restaurant are noodle soups, and starting at US$1.20 a bowl, they are a bargain. The soup arrives at the table steaming hot. A variety of accompaniments ranging from beef and mushroom to intestine or pig stomach can be ordered with the noodles. Vegetarian options are also available.

To Besyrana says that pulling noodles is not difficult, but that the Cambodian weather can have a significant impact on the final result. "If it is hot we use less water, and if it is cold we use more water with the flour."

" Chinese noodles are different from all other noodles ... our noodles do not have chemicals. "

Chinese Noodle Restaurant has been open in Phnom Penh for 20 years and it, along with its sister restaurant Chinese Pulled Noodle near Central Market, seem to be the only pulled noodle spots in town.

The food tastes good and fresh, however, fine dining it is not. But for a simple and healthy meal it is well worth the couple of bucks. The dumplings (US$1.20 for a dozen) are also good value and come either boiled or fried.

"I know well how to make Chinese noodles so that they taste delicious," To Besyrana said.Chinese Noodle Restaurant is located at 553 Monivong and is open from 9am to 2:30am daily.
Posted by CAAI News Media at 11:12 pm