Bombs discovered in Phnom Penh: the police present the alleged “brains” behind the operation 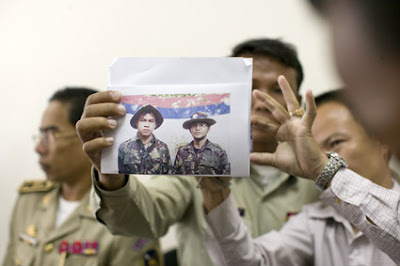 No suspects to present to the public but instead, so-called evidence of the guilt of at least one person out of four arrested after three expl osive devices were discovered on Friday January 2nd near the Ministry of Defence and the premises of television channel TV3 in Phnom Penh. At a press conference held on Saturday January 10th, Cambodia's national police deputy general commissioner Sok Phal revealed the name of the man said to be the brains behind the operations, a 48 year-old former soldier, arrested in Poipet on January 7th.

Leading a group of “bandits in the woods”

All four suspects will not be questioned before Monday January 12th but one of them, thought to be the group leader, confessed to having formed illegal forces with a view to destabilise the government. The national police deputy general commissioner reported that this might not be his first deed. He is also said to have plotted the explosion of a small bomb on July 29th 2007 near the Khmer-Viernamese Friendship monument in Phnom Penh. Five suspects were arrested days following the explosion and sent to jail. The man, from Kampong Cham, was also condemned to a three-year prison sentence in 2003 after being charged with using false documents when he was employed by the Ministry of Defence.

The plot instigator was reported to be called Som Ek but used a variety of names to disguise his identity – no less than 11 other names according to the police – and is allegedly the leader of a small group of “bandits in the woods” committing all sorts of crimes, from kidnappings to organised armed robberies on the national roads of Cambodia, and hiding in the forests of the Mondolkiri and Koh Kong provinces. Photos of Som Ek posing in the forests among his henchmen, all clad in military uniforms, were presented to the press.

“By planting these devices, their aim was to bring attention to the group in order to become known abroad. By giving their movement publicity in the media, Som Ek's idea was to get funds from foreign countries to finance their operations. The pictures they took of themselves in the forests were equally to be used with the same logic and meant to widely circulate”, Sok Phal explains, adding that Som Ek started fomenting his plan back in October 2008 with three other accomplices in Thailand. He is said to hold Thai citizenship, also his wife's nationality.

According to the police, Som Ek chose three henchmen to plant on the roadside explosive devices not equipped with a detonator. The deputy commissioner, however, observed that the three suspects arrested as part of the investigation might not be directly involved, and therefore refused to reveal their identities. “We still have doubts as to their actual guilt...”

A movement aimed at following in the footsteps of the CFF?

Som Ek and his followers are said to have founded the “National Khmer Liberation Front”, the logo of which is a tiger, according to the police official. The former soldier, a member of a fighting group in the 1980s, finally entered the Ministry of Defence in 1993 not long after the signing of the Paris Peace Accords.

According to biographical elements revealed by Sok Phal, Som Ek spent a year in the United States and made several trips to Malaysia, Thailand and Myanmar, always keeping in mind the same preoccupation: “learning how to make explosive devices”. And according to research led by the police, the man might have been a former active member of the supposed movement of sedition entitled the “Cambodian Freedom Fighters” (CFF) dismantled in January 2005 when its leader was arrested in the United States. “Som Ek's confession indicates that their movement might have some connections abroad... Like the CFF, in a way!”, the deputy commissioner pointed out.

Among other things, the police presented as evidence a scale model, that of a radio-controlled helicopter.

The police official stressed that the authorities did not consider this group as a dangerously threatening. He argued that its members would not be able to overthrow the government and estimated that they only acted in their own interest since their activities did not go beyond the line of highway crime. Still according to him, the group is not known to have ties with any political party. The deputy commissioner promised that the police would do their best to dismantle the network, said to spread as far as to the provinces of Kratie and Battambang.
Posted by CAAI News Media at 11:24 pm