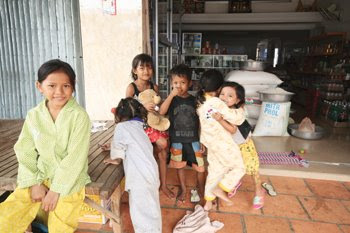 Photo by: TRACEY SHELTON
These children face an uncertain future as their families try to rebuild their community in Damnak Trayoeng village some 16 kilometres from their previous home in Dey Krahorm after accepting a relocation package from 7NG. Those who refused the package were forced out.
The Phnom Penh Post

THE sudden blitz operation to evict residents from Phnom Penh's slum community of Dey Krahorm in the early hours of Saturday morning has refocused attention on development in Cambodia and the effect it has on the people it inevitably displaces.

The eviction brought to an abrupt and violent halt ongoing negotiations between private developer 7NG and local families that dated back to 2005 when the company bought the central city site from village leaders in what many contend was a shady deal signed and delivered without community consent.

During the eviction operation, rights workers say some 140 families that had held out against a compensation and relocation offer in hope of a better deal were bundled onto trucks by police, many of them armed, and removed to Damnak Trayoeng village some 16 kilometres from Phnom Penh.

Instead of the new life promised by the developer, most found empty fields. Of the scores of families evicted, fewer than 30 were assigned homes at the relocation site, where families that had earlier accepted relocation were already trying to build a new community.

It doesn't need to be this way said Din Somethearith, a project manager at the UN Human Settlements Program (UN- Habitat), pointing to the resettlement of 128 families to Akphiwat Meanchey in 1999. "The community leaders were able to choose the site themselves," he said. "And the municipality brought the community to the site and they prepared better living conditions."

" Cambodia's laws and policies do not adequately address resettlement issues. "

However, he conceded it was a rare bright spot in the municipality's relocation record. In recent years the government has drawn heavy and repeated criticism from rights groups for what they say is a patent lack of concern for the rights of residents. A 2008 report by the United Nations High Commissioner for Human Rights said many evictions had been "carried out with excessive force, using armed police and military police, resulting in injuries and the destruction of property.

"Many evicted families have been rendered homeless or relocated to distant sites on the outskirts of Phnom Penh, which lack basic services and are far removed from their usual livelihoods," the report added.

A rock and a hard place

Chean Dara, the project manager on the Happiness City development on Phnom Penh's Chroy Changvar peninsula, in Russei Keo district, said he had sympathy for both parties to the dispute.

"If our company faced the same problem as 7NG, we would not use any violence against the evictees," he said. "We would offer good compensation based on the current market value of the land.

"But if the evictees were unreasonable in their demands, we would be forced to go to the government for help."

However, according to Brittis Edman, a Cambodia researcher with Amnesty International, if a company does need to enlist the help of the government, the government has an obligation as a state party to the International Covenant on Economic, Social and Cultural Rights to protect the population against forced evictions.

Under the covenant, all alternatives must be explored in consultation with those affected before any planned eviction, he explained in a statement released Monday. Evictions may only occur if they do not render individuals homeless or vulnerable to the violation of other human rights. They also must occur in accordance with the law and in conformity with international standards, including genuine consultation with those affected, adequate notice and information on the proposed eviction, and legal aid for those affected.

Unfortunately for developers, and communities in their way, there are no laws or guidelines in place in Cambodia for compensating families who lose their homes to new developments. "Cambodia's laws and policies do not adequately address resettlement issues," Sim Samnang, deputy director of the Resettlement Department at the Ministry of Economy and Finance, told a workshop on involuntary resettlements last week. "There is a need for a national resettlement policy," he said.

Such a policy is actually in existence, at least in draft form, where it has been under consideration since 2006. Nhean Leng, undersecretary of state at the Ministry of Economy and Finance and chairman of the Inter-Ministerial Resettlement Committee, said the so-called Expropriatory Law "to resolve socioeconomic impacts caused by government development projects" will be in place in "the near future".

In the absence of legal guidance, Din Somethearith said the developer needed to take responsibility for a peaceful and fair resolution to disputes.

"Both the private developers and government should work together in facilitating relocations in Phnom Penh", he said. "It is the developer's responsibility to think about the living conditions, access to running water and well-being of the residents [they are relocating] before concentrating on the profits of the development.

"There should be communication with the communities before, during and after developments in Phnom Penh by the government and the developers."

UN-Habitat launched an Urban Poverty Reduction Project in November 2000. At a conference in 2002, which was attended by more than 500 community representatives, the project developed a list of recommendations on relocations, which it delivered to City Hall. The recommendations included ensuring relocations were to nearby areas, or that the land be shared.

Despite its suggestions, City Hall has still not developed national guidelines to guide the relocation process. "The workshop has shown what should happen and what should be considered when developing," Din Somethearith said. However, in my opinion the government believes that if it follows the guidelines for resettlement, it will lose money."

Sok Visal from the Urban Development Fund said land sharing, as suggested by UN Habitat, was preferable to relocations. "The best way [for relocations] is to put developments on site. By land sharing, a compromise can be met between the people, government and proprietors serving all interests," he said.

Sung Bonna, president of the National Valuers Association of Cambodia, agreed, saying that neither relocating evictees to a new home nor offering market-based compensation were suitable solutions. Given the relatively high price of land in Cambodia relative to the potential return on investment, being forced to pay current market value would hamstring developers and lead to a halt in any new projects in the city.

He said a creative solution was needed to ensure existing residents would be better off after development than they were previously. He said that his recommendation to developers was that if they planned to develop in inhabited areas that they set aside land on any development site to house existing residents. "This is the best way for the people," he said.

"They don't need to leave their residence and go far away and they can continue to live and work in the city centre."
Posted by CAAI News Media at 7:22 am