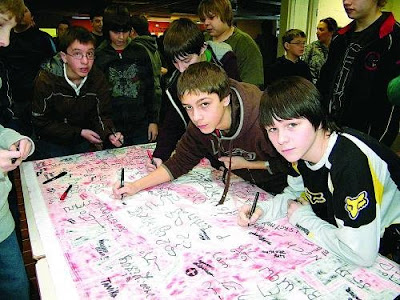 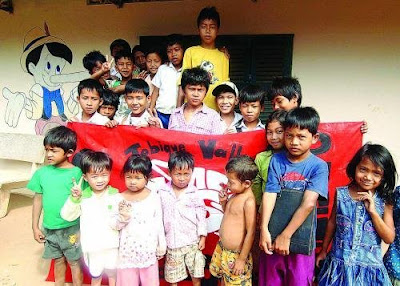 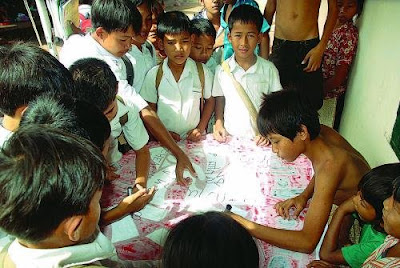 A yearbook is full of memories and for the students of Tobique Valley Middle High School, the 2009 edition will evoke images of how they helped less fortunate children thousands of miles away. The students have raised $650 for school children in Cambodia and on Friday, Jan. 16, they added their signatures to a school banner that has already been signed by the Asian youngsters.

"We decided this year that we wanted to do something a little more meaningful than dedicating our yearbook to an individual," Dylan Mahaney, yearbook editor, said of their decision to dedicate it to the project. "This was something we thought was worthwhile."

Teacher Bridget Nugent Rideout is yearbook advisor and she suggested the Cambodian project to the students. Her dad Professor Bill Nugent and his childhood friend Gary Keenan of K-Line Construction in Woodstock are working to help the Pinocchio School for Poor Children in Sihanoukville, coastal Cambodia, and travelled there over the Christmas holidays to deliver $4,000 raised by a variety of supporters mostly in New Brunswick. The money will be used to buy school uniforms, shoes, school desks and other supplies.

On Jan. 16, the Tobique Valley middle school students watched a presentation that featured photographs of the children taken during the Cambodian visit. Dylan Mahaney along with Sabrina St. Pierre, junior editor, and Kelsey Witherly, yearbook member, explained Prof. Nugent and Keenan not only delivered much-needed money but also book bags and other school supplies that delighted the youngsters.

"They bought a lot of flip-flops," Mahaney added, noting the lightweight footwear is ideal there. "These children really don't have very much."

As students saw photographs of sparse living conditions, Mahaney noted the hammocks in the pictures serve as beds, couches and chairs. Families that number as many as 26 people live in one small home. In another photograph, the Tobique Valley students saw their school banner being signed by the Cambodian children.

"Their alphabet doesn't look like ours so some of their names don't look like words," Nugent Rideout explained. "This is the same banner that you are going to sign and then it will be on display in our school."

The majority of the funds raised by Tobique Valley Middle High School came from the 24-hour famine held by high school students recently. The middle school classrooms had donation collection jars that also brought in dollars.

Anyone who wants to help the children in Cambodia is also welcome to get involved. Paul Nugent is currently working as a professor in the English department at Yeungnam University in Korea and Gary Keenan is back in Woodstock but both men have committed to continuing to help the children.

"Paul is planning to return within the year to personally deliver any donations or items that in been donated in Woodstock or Korea," Nugent Rideout explained. "The two Monquarters will bear the costs of shipping or delivering any items that are donated."

Although Professor Nugent and Keenan have been involved in a variety of humanitarian projects, their discovery of the Sihanoukville school happened almost by accident. The men had been delivering aid in Vietnam and were spending two weeks touring Cambodia when they met the founder of an orphanage and school for the poor who was in the guest house where they stayed. Cees Chamuleau, originally from Holland, had gone to Cambodia to visit an old friend when he became aware of child labour being used to run a small stone quarry in the community.

Appalled by what he saw, he brought the story to the attention of the United Nations and then decided he wanted to open a school there to give the youngsters an alternative to labouring.
Despite a lot of opposition, Cees eventually opened a school for 250 students, many of them residents of the orphanage he also established nearby.

"Children do not have to pay to attend the school as most families in the area have little or no money," Nugent Rideout stated.

"Cees and his associates give the children uniforms and shoes, a midday meal and look after their medical needs, some of which are very serious."

The visit to the school was described as "heart warming" by Nugent and Keenan who said the children were delighted to have visitors. The pupils received Canada pins and flags, a large New Brunswick and Canadian flag, as well as some candy. The children will receive some of Prof. Nugent's recently published storybooks as well as Scotiabank rulers donated by Tom and Bridget Brennan. The supporters also provided a Christmas feast of suckling pig that was enjoyed during the December visit.

"There are some Christians there and they do have Christmas but it isn't like here. They don't have all the presents. It's just a day they observe," Mahaney explained.

Items still being collected include new clothes like t-shirts, caps, school supplies, calculators and donations. A donation of $25 can buy five school uniforms, a desk or flip-flops for 50 children.
More information is available by contacting Gary Keenan at 328-9848.

When the students at Tobique Valley look back on their school year, they will have the satisfaction of knowing they did something that made a difference in the world. The photographs of Cambodian children with big, bright grins make the Tobique Valley students smile.

"You can see how excited these children are," Mahaney noted.
Posted by CAAI News Media at 10:52 pm