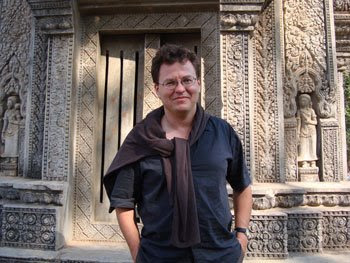 THE Centre for Khmer Studies has embarked on a venture to unite archaeologists from Cambodia, Laos and Vietnam to train a new generation of researchers and shed light on their common regional history.

The first workshop session, titled "Ancient Highways: From the Tonle Sap to the South China Sea. Paving the Way for Regional Archaeological Collaboration in Cambodia, Laos and Vietnam", took place in Siem Reap from January 13-14.

Outbreaks of war and uneasy relations between governments have prevented scholars from resolving the many unanswered questions about Southeast Asia's ancient history.

Seeking to address this, researchers from Vietnam and Laos approached the Center for Khmer Studies, hoping it would facilitate the creation of a network for sharing findings and launching multinational projects.

The "Ancient Highways" initiative seeks to establish a common regional methodology for reporting and interpreting findings, as well as generate research projects that involve archaeologists from all participating countries.

Dr Phillipe Peycam, director at the Centre for Khmer Studies, described the workshop as part of "a long process of empowering Cambodian and regional archaeologists".

Regional collaboration will provide Siem Reap researchers with access to valuable archaeological sites in Vietnam and Laos and train them in the well-tested Vietnamese fieldwork practices. In turn, Laotian archaeologists will benefit from the restoration techniques, equipment and experience of Cambodian archaeologists.

The workshop marks the first time that Laotian scholars have collaborated with their counterparts in neighbouring countries, and Thong Lith, director at the Laos Department of Culture Heritage, told the Post that "the workshop is very important because archaeology education in my country is very poor, and the projects will give my staff a chance to train in Cambodia and Vietnam".

The aim of the collaborative research is to discover the nature of the relationships between the ancient civilisations that constructed the Angkor Wat temples in Cambodia, the Champa ruins in Vietnam and the Wat Phou structures in Laos.

Scholars believe that trading and migration took place between the three societies, but are unsure of its extent and the exact nature of these contacts.

By pooling resources and opening borders, archaeologists from the three countries can more easily determine the dynamics of the empires that inhabited Southeast Asia centuries ago.
Posted by CAAI News Media at 1:04 am