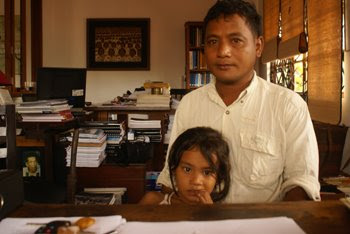 Photo by: CHY TERITH/DC-CAM
Norng Chan Phal and his daughter.

Brothers Norng Chan Phal and Norng Chanly have been confirmed as two of the five children the Documentation Centre of Cambodia (DC-Cam) identified in archival footage donated by Vietnam last month.

DC-Cam has confirmed that one of the five is dead.

"I have met with the older bother, Norng Chan Phal. They were both detained at S-21 with their mother in 1977," DC-Cam Director Youk Chhang said.

Youk Chhang said DC-Cam has long thought there were more than seven prisoners who escaped S-21, although just seven had been identified.

"I present myself now to join the hearing," he said. "I haven't presented myself before because I felt hesitant. The [Khmer Rouge tribunal] has been delayed and left victims to feel hopeless about justice. It has meant that the regime's top leaders died one by one."

Keat Bophal, director of the court's Victims Unit, said it was "not possible" for the child survivors to participate as civil parties in the trial of Kaing Guek Eav, better known as Duch, because the deadline, according to internal rules, has passed.

"However, they can still file a complaint so their information is sent to the trial chamber, who will decide whether to call them as witnesses," she told the Post.
Posted by CAAI News Media at 10:57 pm