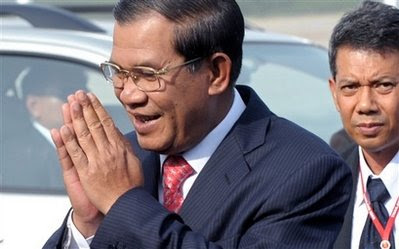 Cambodia's Prime Minister Hun Sengreets before his departure back home at U-Tapao military airport, Saturday, April 11, 2009. Anti-government protesters stormed a building where leaders of Asian nations were to meet Saturday, prompting Thailand's government to cancel the summit and declare a state of emergency in the seaside city that was to host it.(AP Photo/Pornchai Kittiwongsakul, Pool)
www.chinaview.cn
2009-04-11

"The delegations could not enter the meeting place, and we delayed the meetings time after time. The time for the meetings was soon over and finally we decided to return home," Sry Thamrong, adviser for Hun Sen, told reporters at the airport.

"The protesters controlled the meeting place," he said.

It has been scheduled that Thai Prime Minister Abhisit Vejjajiva will visit Cambodia on April 18, but the plan might change because it depends on the internal situation of Thailand, he added.

While in Thailand on Friday, Abhisit Vejjajiva met with Hun Sen and handed over a piece of ancient Khmer artifact to him as a symbol of the bilateral friendship.

When Abhisit Vejjajiva visits Cambodia, at least 7 out of 24 pieces of ancient Khmer artifacts will be returned to Cambodia, according to Sry Thamrong.

These Khmer artifacts were stolen and trafficked out of Cambodia, but finally arrested by the Thai authorities.

Editor: Wang Guanqun
Posted by CAAI News Media at 8:27 am