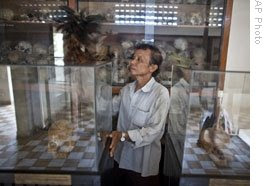 Jailed Khmer Rouge prison chief Duch told tribunal judges Tuesday that detention facilities were set up ahead of the communist takeover of Cambodia in part to avoid American bombardment.

Pits were dug in rural prisons, such as the M-13 facility run by Duch in the forest of Kampong Speu province, to keep prisoners safe from bombing and to prevent their escape, not as an intentional form of torture, he said.

“I had two intentions. The first was to prevent prisoners from escaping, because we didn’t have cement walls,” he said.

The pits were 2 meters deep, and prisoners were shackled, ate little and were very weak, he said. “How can they escape?”

“Secondly, holes were dug to protect them from bombings, because there were many bombings from B-52s,” he said.

Duch, 66, whose real name is Kaing Kek Iev, has been on trial since March 30, facing charges of war crimes, crimes against humanity, torture and murder, for his role as the chief of security for two Phnom Penh prisons and an execution site outside the capital.

The M-13 prison, which Duch administered ahead of the Khmer Rogue takeover of Cambodia, in April 1975, is not under the mandate of the UN-backed court. However, the jungle prison is being used by judges to shed light on Duch’s future role at Tuol Sleng and Prey Sar prisons.

A lawyer for civil parties, Hong Kim Suon, argued before judges Tuesday that the M-13 prison was designed mostly to detain prisoners, not to protect them from bombardment.

Duch said he recognized that the conditions at M-13 were inhumane.