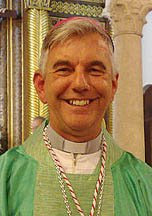 BATTAMBANG, Cambodia (UCAN) -- This Easter season, Cambodians have reason to rejoice and look forward to a future full of hope, says the head of the Church in Battambang.

In his Easter message, Spanish Monsignor Enrique Figaredo, apostolic prefect of Battambang, one of three Church jurisdictions in Cambodia, notes that Easter this year was celebrated at the same time as the Cambodian New Year -- when Cambodians look forward to renewal in their lives.

The Easter season, which celebrates Christ's resurrection, began on Easter Sunday on April 12, and will end on Pentecost Sunday on May 31. Cambodians celebrated their New Year on April 13-14.

Monsignor Figaredo, 49, says that the ongoing trial of those thought to be responsible for war crimes during the Khmer Rouge era (1975-1979), would allow the nation to conclude a traumatic part of its history and move on to a new future.

Another reason for rejoicing, he cites, is the irrigation project in Tahen, just east of Battambang, that will allow farmers to harvest rice twice a year and also plant more vegetables, as well as provide a more reliable source of water.

When we want to talk about LIFE, in capital letters, we are talking about moving on from a mediocre or weak situation to a full life. Easter means this: changing to a more real life, rooted in divine solidarity. Easter makes us understand God's proximity and makes our lives closer to God -- a life that overcomes death.

In our cultural settings, which are always diverse, we have many ways of dealing with contradictions -- our own and those we come up against in life.As Christians, we have a faith experience that helps us to appreciate the cultural context and meaning of the symbols and readings of the Easter season.

In Cambodia, we are very fortunate in that when we celebrate Easter, it's very close to the time when we celebrate the Cambodian New Year, where change and moving on to a new life are celebrated. According to Cambodian tradition, the angels come down from heaven to bless families, their lands, their homes, their villages and entrust the people with new light for the coming year. It's a new step in life. Water is an essential symbol in this path to a new life.
In this Cambodian New Year and Easter time, in our context, we have three main reasons to celebrate our step to a more real life.

We are in the middle of a trial about the genocide caused by Pol Pot and his allies. This trial will conclude an era in Cambodian history and invite us to move on. We have had to wait 30 years for this. Life in Cambodia is still so politicized and self interest continues to motivate people in power such that any justice from the trial may not impact much on peoples lives now, but at least we will be able to look towards the future with some healing of past hurts and injustices.

Today there is no justice. But at least, in my opinion, because of this trial we won't have to look back with shame at the past. We will be able to remember it with less pain and look to the future with more strength and less fear, because we can hope that those who act with impunity now will be brought to justice in the future.

Cambodian New Year brings blessings for all and gives us strength in this time of global economic crisis that is also affecting our local economy, and Cambodian social life. As always, the "little ones," the poor, who here in Cambodia are 95 percent of the population, suffer in silence, losing their jobs and opportunities for progress, and readjusting their lives according to the new international market situation that is affecting the very small Cambodian economy.

The blessings of the Cambodian angels give us strength to face this new situation that demands readjustments in our new lives. One reality is that many young people who moved to the city for work, now have to go back to the countryside. Today in Cambodia we need to create local economies in small villages and towns where the majority of the population lives.

In Tahen, we have undertaken a river project that talks to us about LIFE. The project provides new opportunities in response to people's needs -- to plant rice twice a year and the cultivation of more vegetables and gardens. It also means improved hygiene and an increased capacity to take care of the environment. This project has been initiated thanks to the solidarity of ordinary people who have chosen to put "a drop of hope" into the lives of the Tahen people ("A DROP OF HOPE" project).

This is the Easter story alive in Tahen today. The grandmothers, the old people, talked to me about their happiness in seeing how the river bed has been enlarged. They see a future for their children and grandchildren now. They have been through everything: war, the Pol Pot era and injustice. And today they witness new possibilities for their families. They have gone through their own long "Passion," and today they are happy because they see that coming generations will have what they could not have -- solidarity in order to have life.

These three symbols -- the lively and joyful celebrations of the Cambodian New Year; the trial of the genocide of the Cambodian people that creates a precedent in future efforts to seek justice; the river project which will bring an abundance of water and which was developed out of solidarity with others -- all root us in hope and gives us strength for LIFE.
Posted by CAAI News Media at 8:09 am