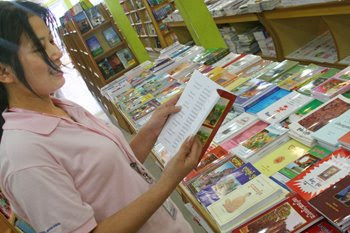 A growing market for works by local writers has seen a rise in the number of new authors, though high print costs and piracy remain a problem.

On the second floor of the International Book Centre in Phnom Penh, 21-year-old Dy Vutheara is working out which book to buy from the hundreds of Khmer-language novels on offer. While she enjoys a variety of genres from detective stories to comics, she eventually settles on a romance.

"Most of them are good, so I have to weigh them up and decide which one would be best," said Dy Vutheara, an environmental science student at the Royal University of Phnom Penh (RUPP).

Dy Vutheara has bought more than 100 novels in the last three years since her teacher suggested she read more. She is not alone. About 40 of her friends also like to read, and she says between them they keep track of newly published novels.

"We never miss any new releases even though we don't have much money to buy them," she said. "So we take it in turns to buy the books and read them."

Kim Sophat, a secretary of state at the Ministry of Culture, says the growing market in Khmer novels is leading to an increase in the number of writers.

"A lot of young people from the provinces and from urban centres are starting to write more and more. They can now make a decent living out of it," Kim Sophat said.

Steady increase
One of the country's best-known novelists, Mao Samnang, who writes under the pen name Rabbit, has noticed that the number of books published in each print run has increased steadily over the past decade - reinforcing the notion that more people are reading. But she says print costs remain an obstacle to increasing readership.

Mao Samnang earns about US$500 for each of her novels, which take one month on average to complete. She says that if readers knew how difficult it is to write a book, they would complain less about the price.

Despite the relatively high cost of books, she says many fans keep up with her new works by renting them from bookstores.

Keo Somaly is a bookworm who has decided to spend her two dollars of food money to buy her favourite book - Neang Macha, or Lady Fish.
She says many youngsters share her taste, which helps to offset the cost.

Obstacles
The emergence of soap operas and foreign movies has some local writers worried. But Mao Samnang says her main concern is piracy.

"Illegal copies can kill writers. Soon after a novel is printed, there are many photocopies available on the market," she said. "The copy is much cheaper, but it is really harmful for novelists and for the printing houses."

The Culture Ministry's Kim Sophat said authors should sue those who produce illegal copies of their works.

Seong Phos, a Royal University professor, agrees and says that counterfeiters should be treated as thieves under the law and should be punished - although he has never seen that happen.

"Readers just scan the cover and the first few pages, and they can tell how the story will end," she said.

Looking to the future, Mao Samnang said she wants to make some changes to her novels. She believes that with greater exposure to foreign books, and a desire to see greater liveliness and creativity in local books, young readers are ready for a new approach.

"Even though we novelists can barely survive, we try to keep our literature alive and maintain the long-lasting tradition of the Khmer novel for the next generation," she said.
Posted by CAAI News Media at 9:10 pm