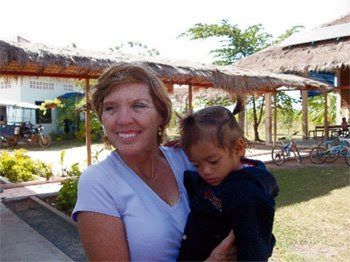 By Jade Ortego
Killeen Daily Herald
http://www.kdhnews.com
The Tuckers say they feel happy. They're lucky. They're blessed. They have more than 1,000 Cambodian children infected with the human immunodeficiency virus who rely on them for medication, food and sometimes shelter, schooling and companionship.

John and Kathy Tucker of Killeen went to Cambodia in the January 2000 as Catholic lay missionaries. They became involved with a hospice program for Cambodians infected with HIV, Seedlings of Hope. Cambodia has one of highest rates of HIV in Asia.

It soon became clear that there were no programs to help children in Cambodia infected with HIV. Because of widespread ignorance about the nature of the virus, those children were frequently cast off, left to die in the street. None of the 200 orphanages in Cambodia at the time would accept any HIV-positive child.

"Assume your sister died of AIDS and you take her children, and find out one of the kids has AIDS. You're afraid that child may infect your biological children … even though it's almost impossible to transmit from child to child," John said. "People don't know that and they want to protect their own children so out of ignorance they abandon these other children," he said.

In 2006, the Tuckers began New Hope for Cambodian Children (NHCC), a nonprofit, nongovernmental organization, which includes an outreach program, a transitional home for intensive care for infants and the very ill, a day care, and most recently, a village for abandoned children infected with the virus.

Neither John nor Kathy has any medical background.

"There was no (antiretroviral) medicine. The choice was to learn about the medicine or let the kids die," John said.

The Tuckers got a manual about HIV and learned about the medicine and found out it was available in Thailand. They bought it, imported it and hired local doctors to help them start their own clinic.

Antiretroviral medication suppresses the virus enough so that the immune system can reconstitute itself. After taking the medication, some children can be tested and come back with a negative result. The children will become sick again if they miss dosages, however, and can develop resistance to the drugs.

The Clinton Foundation donates money for the medicine for all of these children involved with NHCC, and has gotten the cost down to $12 a month for one child. The same medicine is about $1,000 a month in the United States.

NHCC now includes a village, an almost-sustainable commune of abandoned children on 20 acres about 45 minutes from capital city Phnom Penh.

New children arrive every week, kicked out of orphanages or abandoned at hospitals, but the current number is 180.

The kids, age 2 to 19, live in a family and community. NHCC pays a married man and woman $50 a month each to live with and raise eight children in the village. These households are in groups of three, and they eat together; these groups of homes are part of a close-knit larger community.

The Tuckers are working to make the village sustainable. They use only three and half hours of electricity a day, and make their own bio-diesel out of waste vegetable oil from local restaurants. They make methane gas from pig waste, and use solar panels to power water pumps. The village has 250 pigs and 2,200 chickens.

Many orphanages in Cambodia have children make postcards or other crafts to pay for the cost of running it. The NHCC village is funded entirely by private donations, many from the Killeen area, especially St. Paul Chong Hasang Catholic Church in Harker Heights.

The orphans all attend the local provincial school. Their studies are supplemented by tutoring in every class, largely to make up for a lack of education before their entrance into the program. The village also has art, music and dance classes, and a computer class and basketball court that non-infected children from the provincial schools are allowed to sometimes use.

This year, a 19-year-old is graduating out of the village and will move to Phnom Penh to go attend a university there. The boy isn't infected with the virus; he is one of the 27 non-infected siblings of a child with HIV who lives on the village. "We don't split up families," Kathy said.

Next year, the first HIV-positive child will graduate, and the year after, 12 will. The Tuckers want to rent a house in Phnom Penh for graduates to live in while they attend college or vocational school, where they can still receive care and medication, and remain a part of their family.

NHCC is a secular organization, and doesn't proselytize to the children. "Our kids are Buddhist and they stay Buddhist," John said. "But they do all wear rosaries because they glow in the dark," Kathy said.

Kathy also started a daycare program for HIV positive children that provides their widowed mothers with local, living-wage jobs making quilts, which got media coverage by the BBC and the New York Times. Those quilts, which look like baby blankets decorated with elephants and other animals, can be purchased at St. Paul's.

People can volunteer to work at the village or donate to NHCC online at newhopeforcambodianchildren.com.

"We get to take care of sick kids and get them healthy. We found something at the end of our lives that gives us real meaning. We love what we're doing," John said. "We sleep very well," Kathy said.
Posted by CAAI News Media at 11:38 pm

Heya i am for the first time here. I found this board and I
find It truly useful & it helped me out a lot.
I hope to give something back and aid others like
you aided me.

Thanks for any other great article. Where
else could anybody get that kind of info in such a perfect manner of writing?
I have a presentation subsequent week, and I am at the
search for such information.

Hello Dear, are you actually visiting this site
on a regular basis, if so then you will absolutely get good experience.