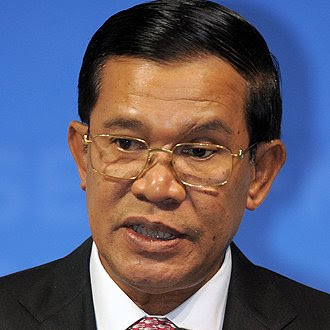 New York-based Human Rights Watch alleged Mr Hun Sen has attempted to control the court by asserting war could return to Cambodia if cases are brought against additional members of the late 1970s regime.

'Hun Sen has no role in this court, yet he keeps trying to use his hold over its Cambodian personnel to interfere,' Brad Adams, Asia director at Human Rights Watch, said in a statement.

The lobby group demanded the court's judges, who are expected to soon rule whether to pursue additional former Khmer Rouge cadres, show independence in their decision. 'The UN and international donors need to put their foot down so that the court can get on with its work in an independent and impartial manner,' Mr Adams said.

The prime minister said in a March speech that he would prefer the tribunal fail than have war return to Cambodia as a result of additional trials. Last week Mr Hun Sen reportedly also told French President Nicolas Sarkozy that the court should limit trials to five former leaders.

The court is currently hearing its first trial. Former Khmer Rouge prison chief Kaing Guek Eav, better known by the alias Duch, has accepted responsibility for overseeing the torture and execution of over 15,000 people.

Four more former leaders from the 1975-79 regime are currently in detention awaiting trial, but the tribunal's Cambodian prosecutor has resisted efforts to pursue six additional suspects.

The Cambodian government has been accused of trying to scupper further trials out of fear that prosecutors might target former Khmer Rouge members currently in top posts in Mr Hun Sen's administration.

The Cambodian side of the international court has also been hit by a scandal in which local staff were allegedly forced to pay kickbacks for their jobs.

Up to two million people died of starvation and overwork, or were executed, as the hardline Khmer Rouge emptied Cambodia's cities in its drive to create a communist utopia. -- AFP
Posted by CAAI News Media at 10:33 pm

because he was one of them!!! I bet he's hiding something! Should charge him for conspiracy!