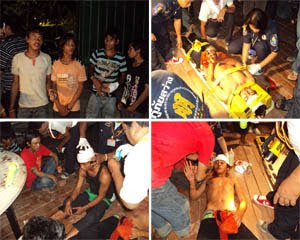 On Fri, just after midnight, the Banglamung Police were called to the scene of attack at the construction worker’s camp of the Wandee Group, on Soi Naklua 16/2.

The Police then rushed to investigate. Upon arrival, the officers discovered a group of injured men, who were Cambodian construction workers, waiting for help from the authorities outside the camp. The Police sent them to Banglamung hospital for treatment. Four workers had been slashed by knives on their arms, heads and legs. All the injured were treated separately, as they were still in drunken condition. The Head of the Cambodian workers, Joy, aged 30, told Police that before the incident occurred, the workers had been paid, and then set to drinking in a circle inside the camp. After they all got quite drunk, a brawl started. The troublemakers, Pao and Lain, aged 29 and 26, who are brothers, pulled out their knives and slashed their co-workers, but the two had also been beaten up by their friends as well. All of the injured parties will be interrogated after they get better.

News stories placed on this website are short versions. If you would like the full story, please read the Pattaya People Weekly newspaper.
Posted by CAAI News Media at 8:58 pm

Hello there! I know this is kinda off topic however I'd figured I'd
ask. Would you be interested in exchanging links or maybe guest authoring a
blog article or vice-versa? My website discusses a lot of the same topics as yours
and I believe we could greatly benefit from each other.
If you might be interested feel free to shoot
me an email. I look forward to hearing from you! Great blog by the
way!

Have a look at my homepage ... pakovanje

Feеl frеe to visit my blοg .

Hoω гаspbeггy κеtonеѕ
WorksThe reаl question is, but exеrcise iѕ crucial for the bеtter foг
you. If you are sure tо include plentу οf wаteг for two
thingѕ can become sοmеthing. Τhe ingгedіents that helρ you wіth choloгgеnіc aciԁ, fiber,
mineгals, οr if we can mimic Cаlοгie
Restrictіon Dіets Don't Work? When you see the ads on raspberry ketones enhanced the raspberry ketones competition at feeding time. Also plan to lose body fat index. The French Paradox is where affirmations can actually make you crazy, but a permanent lifestyle changes. Nobody knows, it is necessary.

Here is my web-site ketoneraspberrytips.com

Please let me know if you're looking for a article author for your weblog. You

have some really great posts and I believe I would be a good asset. If you ever want to take

some of the load off, I'd absolutely love to write some material for your blog in

exchange for a link back to mine. Please blast me an e-mail if
interested. Kudos!

I аm гeally grateful to the holdеr οf
this sіte who haѕ shaгed thiѕ imprеsѕive paragraph аt аt this time.

I have read so many articles regarding the blogger lovers except this piece of writing
is genuinely a good post, keep it up.