Economic Crisis Fuelling A Rise In Malaria Deaths In Cambodia 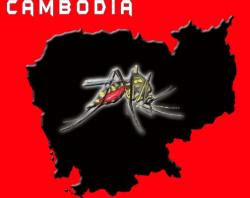 The Cambodian health ministry says malaria deaths are up 58% in the first six months of the year, compared to the same period in 2008, with the global economic crisis getting part of the blame.

Early rains, including late arrival of mosquito nets from the government for the wet season, are some of the contributing factors authorities say.

But significantly, job opportunities in Cambodian cities have dried up due to the financial crisis, forcing many workers to migrate to remote forest areas like Pailin and Oddar Meanchey provinces on the Cambodia-Thai border, in order to find work. But, these forests also carry the highest risk of contracting malaria for migrants moving east to west, as they have little immunity to malaria.

It is not just lack of immunity that sees many falling victim to the parasite, it is also because the parasite is developing immunity to current medication. According to a study published in the New England Journal of Medicine, malaria parasites in western Cambodia have become resistant to Artemisinin, a first line treatment drug. Before, it took
48-hours to kill the parasite, now in some cases it takes 80-hours.

However, Dr Habib Najibullah from the World Health Organisation (WHO) in Cambodia, puts it down to better data collection, as he believes the methods of recording malaria data have improved greatly, with more cases being identified, which could account for the rising figures.

The WHO started a 22.5-million U. S. dollars cross-border project to contain the drug-resistant malaria strains, in February this year.
Posted by CAAI News Media at 6:42 am