CAAI News Media: A means to an end 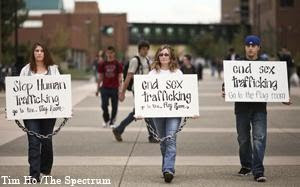 Girls and women are kept in steel cages in dark back alley slums until eager men are escorted in, pick one out and then give money to have sex with them on tattered cots.

This is reality for over 55,000 young women in Cambodia that are trapped in sexual slavery. It is estimated that 35 percent of those girls are younger than 16 years old.

Vintage On Campus, a student Christian group, is trying to end sex trafficking in Cambodia. They are teaming with Agape International Missions, which has a station in Asia where sex trafficking is most prevalent.

On Sept. 16, VOC held an event in the Student Union to raise awareness and money to help stop human sex trafficking in Cambodia. Members of VOC also rocked on a giant seesaw for one-hour timeslots.

“The seesaw was mainly to catch people’s eyes and have them come over,” said Jay Perillo, VOC’s campus minister. “But we also wanted to get the message across that we were ‘tipping the scales of injustice.’”

Many students milled around the event last Wednesday, where there were plenty of brochures, pamphlets and literature to read about the event. VOC also offered Web sites, like Agape International Mission’s Web site, aim4asia.com, where people can make donations.

VOC also supplied orange bracelets, claiming that orange is the color of freedom. The group encouraged students to wear the color to show that they are a part of finding an end to sex trafficking.

“We need to do whatever we can to stop human trafficking,” Perillo said.

Along with the money raised by the VOC members and their sponsors, Perillo estimates that donations brought in over $1,000. All of the proceeds will go directly to AIM’s site to help rescue young girls who are sex slaves.

According to Perillo, AIM helps those who are enslaved by pulling them out of the alleys, educating them, and giving them food, shelter and safety in its Restoration Center in Cambodia. The program also provides therapy and spiritual guidance to the traumatized victims.

“[AIM] is a great organization and we want to help them in whatever way we can,” Perillo said.

According to its Web site, AIM has helped thousands of people and has opened over 600churches in Cambodia since its inception in 1988 in California.

The VOC is relatively new to UB. It was started in the spring 2009 semester. Dave Ashby, a UB alumnus and head of the set-up and teardown team, hopes that the VOC will make a difference with the sex trafficking in Cambodia.

“The VOC would like to eventually expand and do mission trips and raise more money,” Ashby said.

Ashby raised money and sat on the seesaw for an hour with a fellow member of the VOC.

“I wish I could have raised more, but I’m glad that I was able to help,” he said.

VOC would like to put together more events to help end sex trafficking not only in Cambodia, but also all over the world.

“I hope that VOC will expand over the next few years so that we can have more support on campus and so that we can raise more money for all the people that we want to help,” Ashby said.