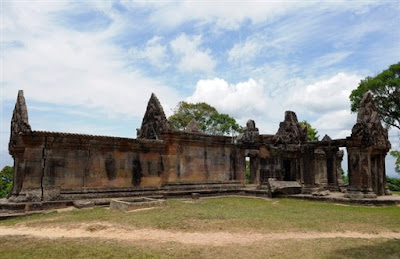 PHNOM PENH — Cambodia deployed riot police Thursday at an ancient temple on the disputed border with Thailand where Thai protesters are due to hold a protest at the weekend, the defence ministry said.

Thailand's royalist "Yellow Shirt" movement says it will rally on Saturday near the 11th century Preah Vihear temple to demand that the government push Cambodian forces out of the area.

The disputed frontier around the temple has been the scene of several deadly clashes between Thai and Cambodian forces since the ruins were granted UN World Heritage status in July 2008.

Cambodian defence ministry spokesman Chhum Socheat said at least 50 police with dogs, batons, and tear gas have been deployed at the temple ahead of the demonstration.

"Our anti-riot police have been deployed to the border Preah Vihear temple in case the Thai Yellow Shirt protesters illegally cross the border to cause problems," Chhum Socheat told AFP.

"We will order our forces to prevent them from entering. We don't want bloodshed to happen, but if they don't listen to us, we will use our self-defence measures," he said.

The Yellow Shirts helped the current Thai government come to power with a blockade of Bangkok's airports in December, but have since turned their fire on the administration over its handling of the temple issue.

Their protest is scheduled on the same day as the rival "Red Shirt" movement is due to rally in Bangkok to mark the third anniversary of a coup that toppled former prime minister Thaksin Shinawatra.

Cambodia halved the number of troops around the temple at the end of August after tensions eased in the area.

The two countries have been at loggerheads for decades over Preah Vihear.

The World Court ruled in 1962 that it belonged to Cambodia, but the most accessible entrance to the ancient Khmer temple with its crumbling stone staircases and elegant carvings is in northeastern Thailand.

The last gunbattle in the temple area in April left three people dead while clashes there in 2008 killed another four people.

The border between the two countries has never been fully demarcated, in part because it is littered with landmines left over from decades of war in Cambodia.
Posted by CAAI News Media at 11:27 pm