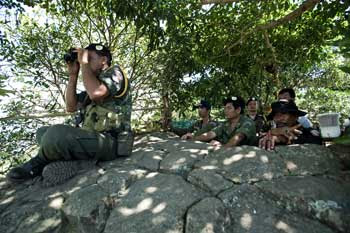 On Saturday, 5,000 yellow-shirted protesters from the People’s Alliance for Democracy (PAD) converged on Thailand’s Sisaket province to protest Thai government inaction over the 11th-century ruins, claiming that Cambodia has infringed on a 4.6-square-kilometre disputed area surrounding the temple.

Dozens were injured as protesters fought Thai riot police and villagers who attempted to block their way.

Chhum Socheat, spokesman for the Ministry of Defence, said that the Thai government’s efforts to prevent protesters from entering disputed areas along the border showed its dedication to a peaceful bilateral solution to the dispute.

“We learned from the protest that our government’s win-win policy to resolve the border dispute through peaceful negotiations has been recognised by the Thai government,” he said.

“During the [protest], I received many phone calls from the Thai authorities in Sisaket province asking me to send a message to Prime Minister Hun Sen not to worry because they were not allowing the protesters to intrude into Cambodian territory.”

Foreign Ministry spokesman Koy Kuong said Sunday that police had been deployed at the temple during the protests. “But we’re not worried at all because the Thai government said they would handle it and prevent the protesters from entering the temple,” he said.

Chhum Socheat said that according to military reports, three Yellow Shirts were killed and 41 injured in clashes, after Thai locals refused to open hotels or sell petrol to them.

But PAD leaders have vowed to keep up their pressure over the temple, threatening future protests if Bangkok does not reassert Thai sovereignty in the area. “We do not accept the World Heritage Committee’s decision to grant Cambodia the right to list the Preah Vihear temple as well as land around it as a World Heritage site,” said a statement read out by PAD protest leader Veera Somkwamkid on Sunday.

“The government and army should do everything under the law to regain the area around the temple for Thailand.”

Srey Doek, commander of Royal Cambodian Armed Forces Brigade 12, stationed at the temple, said the PAD was politically isolated, and that further protests were useless.

“Our armed forces are not concerned about any future threats of demonstrations by Thai Yellow Shirts,” he said.

“We are determined to obey the orders of Prime Minister Hun Sen to defend the territory, to prevent the loss of even one millimetre.”

Thai Defence Minister Prawit Wongsuwon echoed the Cambodian sentiment on Monday, according to the Bangkok Post, which quoted him as saying that “both governments have always been closely working together” on the border issue.