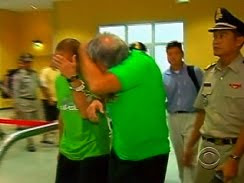 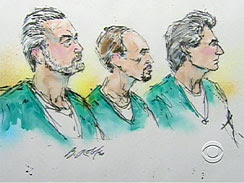 Photo: A courtroom sketch of three convicted sex offenders from California who were arraigned in federal court as part of Operation Twisted Traveler. (CBS)

(CBS) This week in Los Angeles, three convicted sex offenders from California were arraigned in federal court - the first Americans arrested in an international law enforcement crackdown called Operation Twisted Traveler. They are accused of traveling to Cambodia to have sex with children.

"Pedophiles are sadly mistaken if they think they can get away with exploiting children in another country in order to satisfy their own perverted desires," said U.S. Attorney Tom O'Brien.

Jack Sporich, 75, is one of California's most dangerous sexual predators. He served nine years in prison, but in 2008 traveled to Cambodia.

According to the criminal complaint, Sporich would drive through poor towns throwing money and candy. He is accused with having sex with three boys, ages 9 to 13.

"The trauma they have endured is unimaginable and will haunt them for the rest of their lives," said Jeffrey Blom with the International Justice Mission.

Tough laws here requiring convicted sex offenders to register are sending them into hiding, to remote spots like Antioch, Calif. where Phillip Garrido hid Jaycee Duggard for 18 years. Some go much farther.

"I think sex offender registries as a whole are generally great in terms of monitoring. However there are unintended consequences," said Robin Sax, author of "Predators and Child Molesters" and a former prosecutor. "By driving people out of cities and into more rural areas we are again losing contact and not knowing where these people are."

The three men arrested in Operation Twisted Traveler will be tried in November and face 30 years in prison for each of their victims.