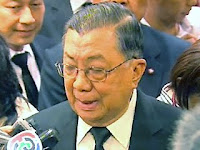 Gen Chavalit made the remarks as he returned from Phnom Penh after a one-day visit at the invitation of Cambodian Prime Minister Hun Sen, whom he described as his "old friend".

"Mr Hun Sen told me that he didn't want to see any violence or armed conflict," said Gen Chavalit, "He advised the two countries to withdraw their troops from the disputed areas to avoid confrontation and find solutions through the Thai-Cambodian Joint Border Committee (JBC)."

Gen Tea Banh also stated that Cambodia was ready to hold talks with the Thai government, and affirmed that his country will not resort to any violence in an attempt to solve the border conflict, according to Gen Chavalit.

The border disputes between Thailand and Cambodia flared up when former Thai foreign minister Noppadon Pattama signed a joint communique backing Cambodia's bid to list the long-disputed Preah Vihear temple as a World Heritage site without endorsement by Thailand’s parliament with the question of sovereignty over the surrounding 4.8 square kilometres land having never been clearly resolved.

Gen Chavalit added that Mr Hun Sen also dismissed media reports that Cambodia has granted a French company a concession to explore oil and gas deposits in overlapping zones claimed by both countries in the Gulf of Thailand as groundless.

"The prime minister said the concession cannot be granted without mutual consent by the two countries, " said Gen Chavalit. "Mr Hun Sen told me that he had informed Thailand's Deputy Prime Minister Suthep Thaugsuban regarding the issue."

Speaking to reporters on his return, Gen Chavalit described his Cambodian visit as worthwhile and felt impressed that Mr Hun Sen expressed his concern for ousted prime minister Thaksin Shinawatra and his family. The Cambodian leader, he said, also offered accommodation for Mr Thaksin whenever he would like to drop by and stay in the neighbouring country.

Mr Hun Sen also suggested that amnesty for all parties concerned is a solution to break the current stalemate in Thai politics and that should be a good start for all parties to solve the problem for their own country, Gen Chavalit said. (TNA)