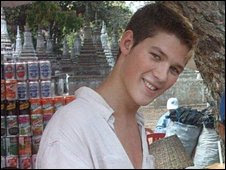 Eddie Gibson has not been heard from for five years

The father of a Sussex backpacker who vanished in Cambodia will return to the country on the fifth anniversary of his disappearance.

His father Mike will be flying out to Phnom Penh to renew his appeal for information.

He said: "As long as there's some hope we're determined to find out what happened to Eddie."

Mr Gibson added: "It's unfinished business as far as we're concerned. We do want to find out what happened to Eddie, he's our son. Five years has gone by and we just won't give up until we find out.

"We do cope we get on with our lives. We've got two lovely other sons, but Eddie will always be in our minds.

"The scenario is that Eddie almost certainly is not alive. You never give up total hope that we could be wrong.

"We have had a lot of inquiries, ongoing inquiries, into his disappearance and some of them do point to the fact that he may have been murdered out in Phnom Penh.

"We hope not but we are determined not to let it go.

"Phnom Penh, its population would be bigger than Brighton but it's a bit like a village and it's inconceivable to us that someone out there doesn't know what happened to Eddie," he said.

"I've been in touch with the Cambodian Daily, it has an Irish editor who has been editor out there for a very long time. He said it is really very, very strange that nothing has come out, nothing has come forward and that is part of the purpose of the visit."

Eddie was three weeks into a combined Asian and Pacific studies and international management course at Leeds University when he decided to travel to the Far East.

Two weeks into his trip, Mr Gibson's mother received an e-mail telling her he would be flying home from Thailand a week later - but he never arrived.

Investigators have completed a picture of his movements only up to 23 October.

Detectives from Sussex Police went to Cambodia in July 2006 to work alongside officers there.

In 2007 his parents made a TV appeal in Cambodia and offered a £10,000 reward for information about his whereabouts.