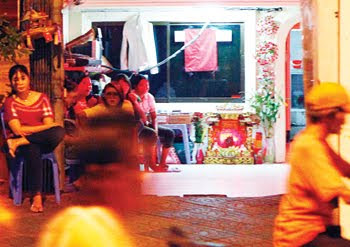 Girls wait for customers in front of a karaoke parlour in Phnom Penh. The UNIAP has expressed concern that laid-off garment workers will be drawn into sex work to help suport their families.

BETWEEN 15 and 20 percent of former garment workers who have lost their jobs as a result of the global economic crisis have joined the capital’s entertainment sector, sparking concerns that many have embraced sex work as a last-ditch means of supporting their families, a UN official said Sunday.

Lim Tith, the national project coordinator for the United Nations Inter-Agency Project on Human Trafficking (UNIAP), said he had arrived at the figure by combining new data with the results of a July survey that found that “declining working conditions” were forcing an increasing number of Cambodian women into the sex trade.

According to statistics from the Ministry of Labour, more than 30,000 garment workers lost their jobs in the first three quarters of 2009, meaning that, if Lim Tith’s estimate is accurate, at least 4,500 women have entered the entertainment sector this year alone. The jobs of a further 30,000 garment workers have been suspended.

Lim Tith said many of the women view the “entertainment sector” – which includes karaoke bars, massage parlours and brothels – as their only option.

“I think that they don’t want to, but they have no choice but to work in those places because of pressure to support their families,” he said.

The UNIAP survey found that the most commonly cited reason for entering the sex trade was “difficult family circumstances”, followed by relatively higher earnings and better conditions than those they encountered in factories.

Several NGOs said they hoped the new estimate would prompt the government to ramp up efforts to provide vocational training to former garment workers who had lost their jobs.

“The government is aware of the problem. That’s one thing. The second thing is to act,” said Pung Chhiv Kek, founder of the rights group Licadho.

“We would expect that when these poor garment workers lose their jobs because of the crisis, the government would have a proactive programme to train them and to help them find work.”

Mey Sovannara, communications coordinator for the HIV/AIDS NGO Khana, echoed this point, saying: “The government has to focus on vocational training centres to provide training to the women for skills other than serving, like weaving, so they can run their own shop.”

Hor Malin, an undersecretary of state at the Ministry of Women’s Affairs, said the government had been trying to assist these women and would continue to do so.

“We have never been careless with them when they don’t have work to do, even though we cannot help all of them,” she said. “We’ve tried very hard to train them in new skills in order to find a solution for them.”

She added, though, that the ministry also hopes some of the former garment workers would leave the capital.

“Of course, I cannot prevent them from working in the entertainment sector, but according to our ministry’s strategy, we want them to stop and go back to their homeland to do farming or feed the animals,” she said. “It’s better than working in a karaoke parlour or as a beer promoter.”

This suggestion, however, was dismissed by Pung Chhiv Kek as unrealistic.

“They can’t go back to their villages because they have to get money for their families,” she said.