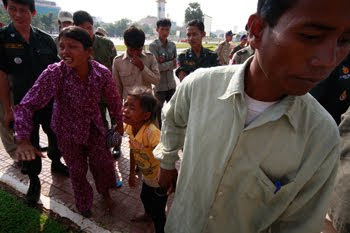 Heang Soeun, 38, and family are forcibly moved by police along with fellow residents of Kampong Thom’s Kraya commune after they attempted to protest their pending eviction at Wat Botum park Sunday.

DISABLED veterans due to lose their homes in an increasingly tense standoff with authorities Kampong Thom province gathered in Phnom Penh on Sunday in a bid to rally the support of Prime Minister Hun Sen, but were turned back by police.

More than 100 former soldiers and their families were ordered to return to Kampong Thom. Forty-seven did so, but on arrival were barred from re-entering Kraya commune, at the heart of a land dispute since 2007, villagers said.

“They would not allow us to go home, and they tell us they will deploy armed forces tomorrow,” Pann Ta, 42, said Sunday. “We are so sorry to lose our [cassava] plantation in the village because for the past three or four years, we have tried our best to grow it.”

Pich Sophea, Santuk district governor, said the veterans, who are being temporarily detained at a pagoda, will be sent to a new location being offered to the evictees as compensation. He also confirmed that “a coalition” of provincial authorities was poised to forcibly evict the remaining families from Kraya today after several recent delays. Uch Sam On, Kampong Thom deputy governor, said: “We do not know yet whether there will be violence or not, but we have prepared hundreds of police officers.”

Licadho consultant Mathieu Pellerin said the organisation was concerned that the eviction would lead to violence.

“We still fear renewed violence at Kraya,” he said. “The deadline has passed; the offer of compensation has been rejected. We hope the authorities won’t use violence as a final solution. These families have a legitimate claim to the land and we recognise the strong will of the community to remain on that land.”