Enemies Of The People 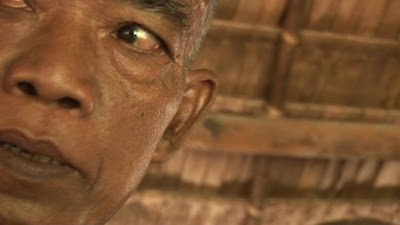 http://www.screendaily.com/
via CAAI News Media
29 January, 2010
By David D'Arcy
Dirs. Rob Lemkin, Thet Sambath. Cambodia/UK, 2009, 93 minutes
Enemies Of The People revisits the genocide in Cambodia under the Khmer Rouge, as journalist Thet Sambath, who lost his family in the killing fields, meets men who ordered and carried out the mass murders. This heart-wrenching documentary presents shocking unprecedented testimony straight from the mouths of killers, and begins to answer how such a tragedy could have happened.
Theatrical potential may be limited, but Enemies Of The People is a compelling film which should play well on television in North America and throughout Europe. There is also a broad educational market for such a documentary on the actual workings of genocide.
“I think only the killers can tell us the truth,” Thet Sambath says in his poignant English-language narration, “[of] why they killed the people and who ordered them to kill.”
The film’s revelations emerge slowly, as the gentle Sambath listens patiently, even smiling on occasion. Peasants recall killing under orders, but are never made aware that their interviewer’s own family died. A former low-level Khmer Rouge killer grins uneasily as he demonstrates how he slit hundreds of throats. Sambath’s investigative style is persistence rather than attack, and it pays off.
The Khmer Rouge’s ideological leader, Nuon Chea, known as Brother Number Two (after Pol Pot), acknowledges, after initially claiming ignorance, that mass murder was a policy in the countryside. When finally told of Sambath’s family’s fate, he says he is sorry. Nuon Chea, now aged 83, is currently awaiting trial on charges of genocide.
Production values are bare-boned but more than adequate. With ordinary lighting and without drama, the camera lingers on the faces of men who speak of murdering people with their own hands. Cutaway shots to the empty killing fields are mute meditations on the extent of the loss.
Posted by CAAI News Media at 8:00 am