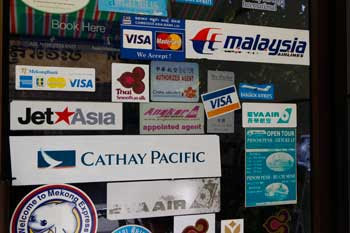 Photo by: TRACEY SHELTON
The front door of a travel agent in Phnom Penh displays the logos of Asian airlines. No carriers have yet signed up to fly to the newly renovated Sihanoukville Airport.
via CAAI News Media
Monday, 15 February 2010 15:00 May Kunmakara
Though renovations were finished last year, officials say they don't know when flights to the hub will resume, as airlines have failed to sign up amid downturn
THE OFFICIAL opening date of Sihanoukville’s recently renovated airport has yet to be determined nearly two months after it was due to open for flights, according to aviation officials.
However, discussions about the inauguration of Sihanouk International Airport (SIA), formerly known as Kang Keng airport, are under way, they said, as the new hub continues to suffer from a lack of demand on the back of a global aviation recession that caused air arrivals in the Kingdom to fall last year for the first time on record.
Director of SIA, Tith Chantha, said Friday that he hasn’t received any information about the launch of his airport yet, following its upgrade to comply with international standards overseen by Société Concessionnaire des Aéroports (SCA), the French company that has an agreement with the government to operate Phnom Penh International Airport, Siem Reap International Airport and Sihanouk International Airport.
SCA managers have previously said that the official launch of SIA was scheduled for sometime in February or March.
Work on SIA began in 2006 with US$30 million of investment as its runway was extended to 2.5 kilometres. SIA was scheduled to officially launch on November 17.
“I don’t know the exact date [to launch SIA] because it has been delayed,” Tith Chantha said. “Perhaps SCA wants to wait until their top officials can join us.”
Mao Havannall, sectretary of state at the State Secretariat of Civil Aviation (SSCA), also said he did not know the opening date, adding that officials had not told him when he posed the question to SCA.
Chief Operating Officer of SCA Paul Cheung A Long declined to comment on the issue.
Khek Norinda, communications and marketing manager for SCA, did not give a schedule either, instead referring to discussions with the government regarding the airport's future.
“We believe that the discussions that the Royal Government and SCA are having with airlines should bring a positive outcome and regular flights starting this year,” he said in an email.
It is hoped that new national carrier Cambodia Angkor Air will run the first flights at the new airport, said Tith Chantha, adding that he would like SIA to become Cambodia’s primary international airport.
Tourist arrivals by air declined 10.3 percent in 2009 compared to 2008, according to Ministry of Tourism figures.
Posted by CAAI News Media at 11:46 pm