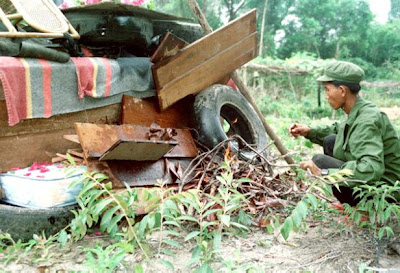 A Khmer Rouge fighter lights a hastily built pyre of mattresses, car tyres and old chairs beneath the coffin of his former leader, Pol Pot, in 1998


via CAAI News Media
Government criticised over plan to profit from country's genocidal past
By Andrew Buncombe, Asia Correspondent
Thursday, 11 March 2010
The place where the body of Pol Pot, the former Khmer Rouge leader, was unceremoniously burned in a pile of rubbish is set to be the latest location from Cambodia's dark recent history to be transformed into a tourist spot.
In a controversial move that underlines the increasing allure of the country's genocidal history and the importance of tourists to Cambodia's coffers, the government has decided to "preserve and develop" Anlong Veng. The jungle town in the far north of the country was the last stronghold of the rebel movement responsible for the deaths of up to 2 million people. In a statement, the authorities in Phnom Penh said the town will be transformed into a "historic tourism site for national and international guests to visit and understand the last political leadership of the genocidal regime".
For more than two decades hardly anyone visited Cambodia. Although the rebels who seized power in April 1975 were ousted just four years later, a civil war kept most visitors away until well into the mid-1990s. For years, splendours such as the World Heritage site of Angkor Wat were effectively out of bounds.
Yet tourism has bounced back. Last year around two million visitors visited the country and by next year the authorities hope the figure will top three million. Increasingly, as tourists have returned to Cambodia to visit such wonders as the 12th-century temple complex near the town of Siam Reap, they have also found time to fit in locations associated with the Khmer Rouge.
Chief among these have been Tuol Sleng prison in Phnom Penh, where up to 17,000 people were tortured and sent for execution, and the killing fields themselves, located on the edge of the city at Choeung Ek. Today, tour buses pull up and hundreds of thousands of international visitors wander around the former school that was turned into a terrible prison and the quiet fields nearby, where people were clubbed to death and buried in mass graves.
Even if it wanted to, Cambodia has not been allowed to forget its past. A major legal process to try six former Khmer Rouge officials is proceeding under the oversight of the UN in a move that took more than a decade to agree.
Yet not everyone agrees that the government should be using this dark period in the country's history – when up to a third of the population was killed or else died of starvation or disease – to bring in foreign currency, however much they are needed.
Youk Chhang, who heads the well-respected genocide documentation centre, which brings together personal testimonies and documents from the Khmer Rouge era, said last night: "Using genocide to attract tourists is irresponsible. These [events] have to be preserved; they have to be documented. But if you allow this to be commercialised then you dehumanise and victimise us. For a long time we have been struggling to become something else."
The government of Hun Sen, who himself once was a Khmer Rouge official, has been planning to promote Anlong Veng for some years and has identified three dozen places at the remote hilly location it wants to bring to the attention of tourists. As recently as 1998, the village near the Dangrek mountains was the final stronghold of the last remnants of the Khmer Rouge.
Among the obvious elements of interests will be the place where the French-educated Pol Pot was cremated after he reportedly suffered a heart attack. In the final months of his life, the former leader had been under detention in his hut after a split within the remaining members of the movement.
The government believes the fenced-off area in which he was held, as well as warehouses where munitions were stored, will also attract visitors. Another spot to be promoted is the grave of Ta Mok, also known as "The Butcher" for his apparent ruthlessness, and who was the only Khmer Rouge leader not to be killed or else surrender to government forces. Captured in 1999 after the movement disintegrated, he died in 2006 while waiting to be tried at the UN tribunal.
Posted by CAAI News Media at 11:35 pm