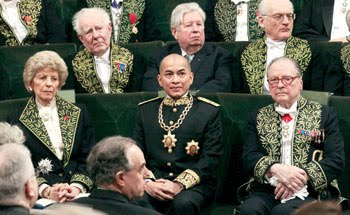 Photo by: AFP
King Norodom Sihamoni is flanked by French historian Helene Carrere d’Encausse (left) and academician Gabriel de Broglie during a ceremony held Friday in Paris.
via CAAI News Media
Monday, 15 March 2010 15:05 James O'Toole
KING Norodom Sihamoni was inducted Friday into France’s Académie des Inscriptions et Belles-Lettres, a society that celebrates scholarship in the humanities, in recognition of his patronage of the arts and support for archaeological preservation.
In a ceremony held in Paris, the King thanked the academy for the honour, though he said his father, King Father Norodom Sihanouk, deserved much of the credit for instilling a sense of duty within his children.
“At the side of our father, who made history, we have learned never to cede to despair,” Sihamoni said.
“Furthermore, in times marked by tyranny, we have learned definitively that the dignity of the human condition lies in the refutation of servitude and the rejection of the voices of dishonour.”
The academy praised Norodom Sihamoni for his commitment to archaeology, particularly that of the Angkorean period, saying the King “brings a new force to the defence of an archaeological treasure and support to a field of scientific research of primary importance”.
“He who continues to play an essential role in the international community in favour of historical and archeological research of his country and for the defence of inheritance has sealed a moment of great emotion in France and in all of Cambodia,” the academy said in a statement on its Web site.
ADDITIONAL REPORTING BY STEVE FINCH
Posted by CAAI News Media at 11:43 pm