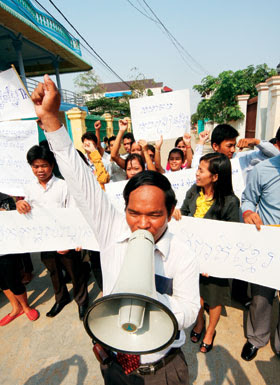 Photo by: Heng Chivoan
Protesters rally in Phnom Penh Sunday during a demonstration aimed at urging women, particularly students, not to wear ‘sexy clothing’ and short skirts that fall above the knees. Rally organisers said they disapproved of what they see as a growing desire on the part of Khmer youth to copy foreign cultures, which they said ran the risk of compromising Khmer traditions.
via CAAI News Media
Monday, 29 March 2010 15:06 Mom Kunthear
MORE than 100 people rallied on Sunday in an effort to urge Khmer women not to wear short skirts, organisers said.
Seang Bunheang, director of the Khmer Teachers’ Association, hailed the weekend rally as a success, even though it attracted fewer than half the number of participants originally projected.
“We want to appeal to teachers, school directors, female students and their parents to take measures to stop female students from wearing short skirts,” Seang Bunheang said.
Sunday’s rally was an abridged version of what had been planned as a march through the streets of the capital. City Hall refused to allow the group to march, Seang Bunheang said.
Still, he said the demonstration will form part of a mounting campaign against what he sees as a trend towards skimpy outfits.
“I don’t force [women] from wearing short skirts, but I want to take care and improve our Khmer culture,” Seang Bunheang said. “We have to take care in order for other countries not to look down on us.”
San Arun, a secretary of state at the Ministry of Women’s Affairs, applauded the campaign, saying that women should make sure their skirts fall below their knees.
“I think it is not good-looking for female students and other Khmer women who wear short skirts or sexy clothes in schools and in public places,” said San Arun, who suggested that women attract unwanted attention by dressing suggestively.
“Wearing short skirts and sexy clothes is a reason to cause rape cases to occur because all men, when they see white skin, they feel like having sex with them.”
San Arun said the trend towards shorter skirts was part of an ill-advised attempt to copy other cultures – a move she suggested could destroy Khmer culture if left unchecked.
Posted by CAAI News Media at 12:23 am