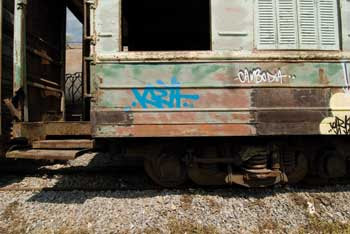 Photo by: RICK VALENZUELA
An old railway carriage sits idle at the Phnom Penh Railway Station in January. Cambodia's decrepit rail network will finally resume service from Phnom Penh to Kampot on October 1, if renovations are completed, a manager at logistics firm Toll Holdings said Tuesday.
--------------------------------------------------------------------------------
There is a lot of work happening on the track at the moment. The critical date is october 1."
--------------------------------------------------------------------------------
via CAAI News Media
Wednesday, 03 March 2010 15:04 Nguon Sovan
Australian logistics company Toll Holdings, which will manage the revived railway, aims to significantly expand rail services
THE first day of October has been billed as the date when commercial rail operations are to recommence between Kampot and Phnom Penh, according to the regional director of Australia’s largest trucking and freight company Toll Holdings Ltd (THL), the firm that will eventually manage the renovated Cambodian railway.
Speaking after the signing of Asian Development Bank’s (ADB) US$42 million supplementary funding agreement for the rehabilitation of Cambodia’s dilapidated rail network Tuesday, THL’s Brian Warry said he wanted the first commercial train to run between the two towns in just seven months time.
THL will operate trains on the network, while the Ministry of Public Works and Transportation acts as an executing agency, responsible for developing railway infrastructure and stations.
“There is a lot of work happening on the track at the moment,” he said. “The critical date is October 1, when the section of rail from Kampot and Phnom Penh is due to be finished in order to begin some modest train operations.”
Warry added that he hopes the setup of the railway will become an “entry point” for THL to widen its operations in the country. He said wanted THL to cover logistical activities such as warehousing, road transportation and freight-boarding. The firm operates a small business in the Kingdom providing offshore oil and gas support.
Cambodian officials were positive about extra funding for the Kingdom’s railways.
Minister of Economy Keat Chhon said after the signing ceremony that the supplementary funding will be used to partially upgrade 254 kilometres of line from Phnom Penh to Sihanoukville and 338 kilometres from Phnom Penh to Sisophon, for construction of new rail links to the container port in Sihanoukville and two dry ports in Phnom Penh, building of new freight facilities on the outskirts of Phnom Penh and to provide institutional support and capacity building.
According to an ABD press release, the entire system will be operational by 2013.
Kunio Senga, ADB director general for the Southeast Asia Department, said the upgraded rail network will position Cambodia as a subregional transport hub, creating new jobs and business opportunities in the manufacturing and logistical services sectors.
The agreement consists of a $42 million supplementary loan from ADB and a $21.5 million grant from the Australian government through the Australian Agency for International Development.
The total cost of the project is estimated at $141.6 million of which ADB’s loan accounts for $84 million and an OPEC fund for international development loan accounts for $13 million. The Australian government’s grant accounts for $21.5 million, and the government of Malaysia’s donation of 106 kilometres of rail is worth $2.8 million. The Cambodian government has contributed $20 million.
The move could be a positive one for THL after its stock fell 18 percent in Sydney on February 25 after posting A$147 million (US$131 million) in earnings before items for the six months ending December 2009. Revenues fell 6 percent from a year earlier, Bloomberg reported.
Posted by CAAI News Media at 9:49 pm