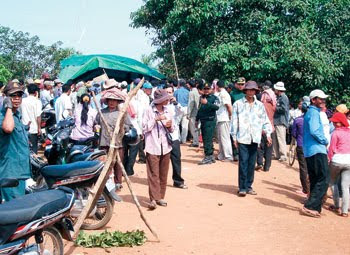 Photo by: Pha Lina
Former municipal police chief Heng Pov’s new book is displayed for sale Tuesday along Street 51 near Sihanouk Boulevard.
via CAAI News Media
Wednesday, 21 April 2010 15:04 Cheang Sokha and James O'toole
FORMER Phnom Penh municipal police chief Heng Pov has written a book from prison that offers effusive praise for Prime Minister Hun Sen, in what observers say is a marked turn from previous public comments and may be an attempt to secure a pardon.
The book was first distributed to stores in central Phnom Penh on Tuesday, with Heng Pov’s preface dated January 2010. In the 227-page volume, titled Strategy to Extinguish War in Cambodia, Heng Pov offers an analysis of recent Cambodian history and politics that describes Hun Sen as the Kingdom’s most skillful leader and refers to him by his full honorific.
“The special condition of the diplomatic strategy of Samdech Akka Moha Sena Padei Techo Hun Sen is not to consider any philosophy, country or religion as an enemy of Cambodia with whom we cannot compromise or reconcile,” Heng Pov writes, offering similar praise for the premier’s role in domestic politics.
“Samdech Techo never considered other Cambodian politicians as life-or-death enemies with whom he cannot compromise or reconcile,” he says.
Kao Soupha, Heng Pov’s lawyer, said he had proofread the book prior to publication. He said Heng Pov’s aim in writing it had been to demonstrate his patriotism and to describe Hun Sen’s political career.
“This book is not written simply to praise Hun Sen, but to show the facts of his leadership of the country,” Kao Soupha said.
Heng Pov, a widely feared leader during his time as police chief, was arrested in 2006 and sentenced last year to over 90 years in prison on a raft of charges including extortion, kidnapping and murder. He is scheduled to appear at the Appeal Court on April 30 to contest three of the cases against him, though Kao Soupha said that at this point, Heng Pov’s only hope is for the prime minister to come to his aid.
“For Heng Pov’s case, the court will never find justice for him, and only Hun Sen can save him,” Kao Soupha said.
Heng Pov’s praise for Hun Sen stands in stark contrast to previous public statements, including a 2006 interview with the French weekly L’Express in which he accused Hun Sen and former national police chief Hok Lundy of being behind the 1997 grenade attack on a Sam Rainsy Party rally and numerous other assassinations of opposition or political figures.
He also alleged that actress Piseth Pilika, who was shot and killed in 1999, was gunned down on orders from first lady Bun Rany, who he said had learned of an affair between the starlet and her husband, and accused local tycoon Mong Reththy of involvement in drug trafficking. These allegations have been denied.
Heng Pov has claimed innocence of the charges against him, alleging that they were engineered by Hok Lundy, his former rival.
Hok Lundy was killed in a helicopter crash in 2008, a fact that Cambodian Defenders Project director Sok Sam Oeun said may have played into Heng Pov’s decision to write the book.
“The enemy of Heng Pov, Hok Lundy, is dead, so maybe Heng Pov thinks he has a chance to be pardoned by the prime minister,” Sok Sam Oeun said. He added that for a case involving a high-profile political figure – Heng Pov is also a former adviser to Hun Sen – a pardon could indeed be possible.
Hang Chhaya, executive director of the Khmer Institute for Democracy, said the book might have been conceived as an attempt to “appease” Hun Sen. Though he said a pardon could be possible, he argued that given the severity of Heng Pov’s past statements, the premier may be unlikely to offer leniency.
“The fallout was so deep,” he said. “I know that sometimes the prime minister does have a change of heart over political-related court cases, but this one is a difficult one.”
Minister of Information Khieu Kanharith said that Heng Pov may indeed be angling for clemency, but declined to offer a response without first reviewing the book.
“He has the free time to write – that might be the intention – but because I didn’t see the book, it would be difficult for me to make any comment,” Khieu Kanharith said, adding that government staffers could “make excerpts” for Hun Sen if they were deemed of interest.
Nearly US$1 million in Heng Pov’s personal bank accounts has frozen following his arrest, and he wrote to Hun Sen last year in a bid to secure funding for family and legal expenses, asking the prime minister to “intervene to allow me to withdraw some money from the bank, with forgiveness”. This request, however, went unheeded.
Prey Sar prison director Mong Kim Heng said Tuesday that despite his former stature, Heng Pov has received no special treatment in jail.
“He has nothing to do each day besides exercise,” Mong Kim Heng said, “and I have observed that he likes reading and writing in his free time.”
Posted by CAAI News Media at 9:44 pm