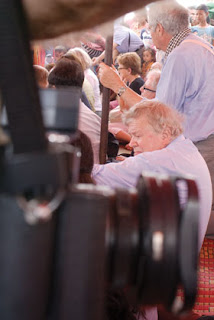 Photo by: Rick Valenzuela
Kurt Volkert, seated in the foreground, weeps Tuesday at Wat Po as the names of fallen journalists are read aloud
via CAAI News Media
Friday, 23 April 2010 15:02 David Boyle and Mom Kunthear
Kampong Speu Province
A T the site where five journalists were beaten to death 39 years ago, former war correspondents gathered for an emotional ceremony on Thursday with local villagers to mourn the deaths of all journalists killed during the 1970-75 civil war in Cambodia.
More than two dozen former correspondents participated in the ceremony commemorating their fallen colleagues, planting a tree at Wat Po in Kampong Speu province and joining in a Buddhist ceremony that offered up blessings for the dead along with food and other gifts.
With tears in her eyes, Elizabeth Becker, who covered Cambodia for The Washington Post, read the names of all the journalists who died during the Lon Nol regime. At her side was Yoko Ishiyama, whose husband, Koki Ishiyama, was one of those killed at Wat Po in May 1971.
“Koki and I were very good friends, and I’ve written about him, and he was one of the very special people in the press corps,” Becker said afterwards. “And I had never met [Yoko] before, and I think her presence as a Buddhist and her spirit lighting the sticks gave it the profundity it wouldn’t have had otherwise.”
“And then just reading everybody’s name, that’s why we came thousands of miles,” she added.
On May 31, 1971, a group of nine journalists from rival networks CBS and NBC encountered Vietnamese and Khmer Rouge troops advancing down National Road 3 in Kampong Speu.
Four journalists who had ventured past a destroyed bridge were killed instantly by a rocket-propelled grenade and gunfire, and the remaining five were soon captured and taken to Wat Po the next day.
Orm Pav, who at the time was 13 years old and living in a nearby village, said on Thursday that those five journalists were killed because their captors regarded them as spies.
“They escorted those people to a the small stream and killed them at around 7:30pm at nighttime by chopping them in the neck with a hoe,” he recalled.
Though he said he found Thursday’s ceremony “strange”, he added that he had been touched by the fact that the former correspondents travelled so far to honour their dead friends.
“This is the first time that I have seen a large group of foreigners come here to pray for them, and I want to have this event every year in order to make a memorial in this place,” he said.
Jeff Williams, a former reporter for AP and CBS, on Thursday recalled drinking with two of those killed at Wat Po – George Syvertson and Gerry Miller – two nights before their deaths.
“George was more conservative, and Gerry Miller was a very effervescent guy, and he kept saying, ‘I’m in a combat area, I’m in a combat area, right’ – little knowing that in two days he was going to be in more combat than he ever imagined,” Williams said.
En Thoeun, another villager, said that he was the first person to discover the remains of four of the five men killed at Wat Po, just hours after an excavation effort conducted with US support concluded without success.
“I am happy and surprised that there are many foreigners who have come to offer gifts to the monks to dedicate to dead people,” he said Thursday.
Kurt Volkert, a former journalist and the man who initiated the effort to retrieve the bodies, said he had been moved by Thursday’s ceremony, though he was distressed that the remains of cameraman Tomoharu Ishii had not been found.
“There was the planting of a tree, which I think is much more appropriate than a monument with names – it’s more anonymous, it’s natural and I thought it was a very good, sensitive idea,” he said.
He added, though, that he did not believe he would return to the site.
“I don’t think I will be coming back.... It’s time for closure, for me. Others will come back. It doesn’t mean I’ll forget about it, but I think you don’t always need a physical presence to remember a place or to remember an important part of your life – this strengthens the memory, but life goes on.”
For a comprehensive multimedia wrap-up of the war correspondents’ reunion, including video interviews and an interactive historical gallery, visit www.phnompenhpost.com.
Posted by CAAI News Media at 12:56 am