Cambodia is ‘the land of smiles’ 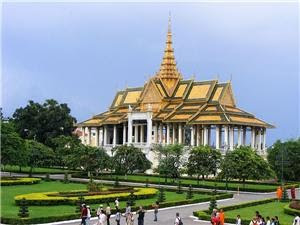 Gap year travellers looking for a friendly welcome might want to consider Cambodia – also known as the Land of Smiles.
According to Suite101 contributor Eric Coggins, the Kingdom of Cambodia is fast becoming one of the most popular destinations in south-east Asia for tourists.
The reporter noted the nation has less than 15 million inhabitants, with most of them from the Khmer ethnic group.
It is similar in size to Southern California and can be found between Vietnam, Laos and Thailand, the journalist observed.
Mr Coggins stated the main attraction for travellers are the temple ruins that have survived from the Angkor civilisation, with the most popular point of interest being the Buddhist temple of Angkor Wat and the surrounding Angkor Thom fortress complex.
The site was recently recommended by Daily Telegraph journalist Natalie Paris, who also advised holidaymakers take in the concob towers and the hundreds of carved faces at Bayon.
Posted by CAAI News Media at 3:32 pm